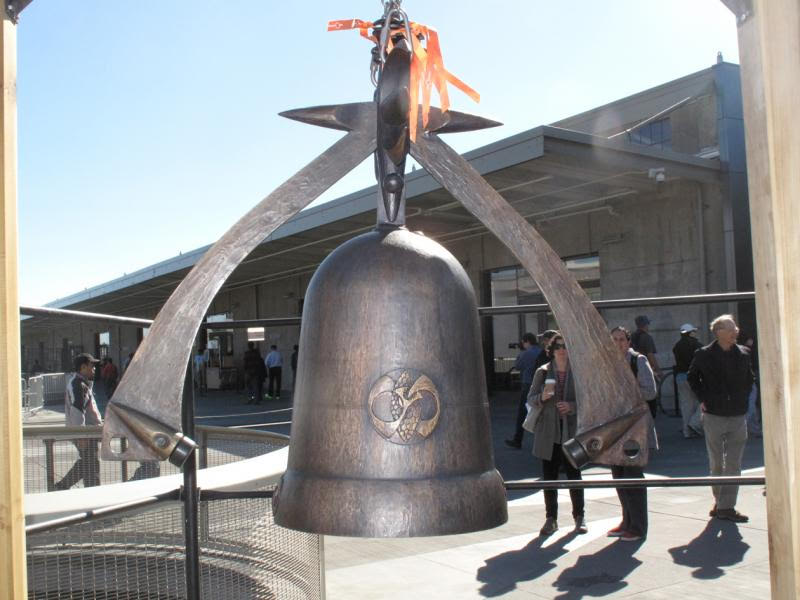 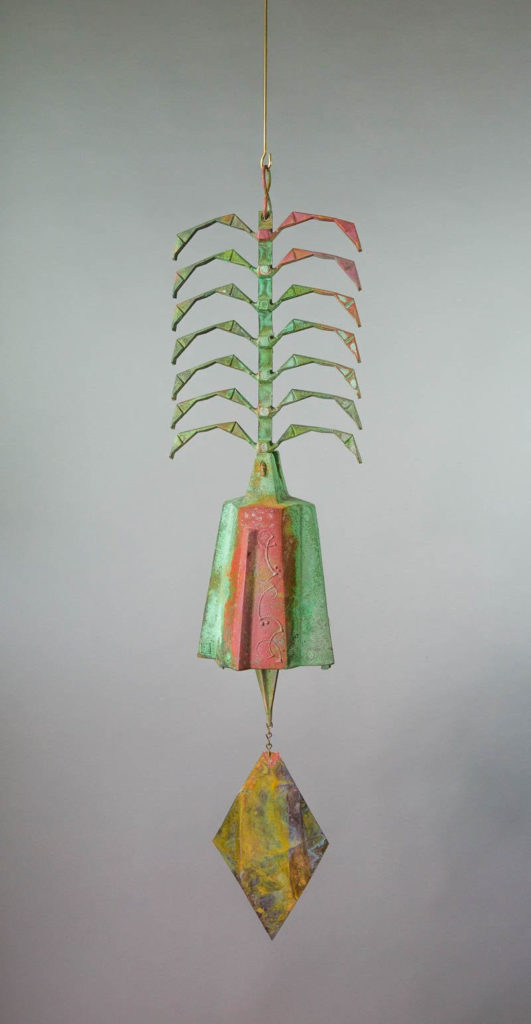 Bells are as old as time, marking its stately passage with roots in ancient Asia, Europe and Africa over 4000 years ago. Casting bells is often a ritual affair, whether in clay, crystal or bronze; even the act of playing a bell has ceremonial overtones, often reminding us to be present.

Acoustically, bells are characterized by modes of vibration having a node at the top or center, and more active vibration toward the rim.  Bells are often rich in inharmonic overtones, summation tones, and beating patterns which entrain brainwaves. Historically, these overtones were tuned by artfully weighting nodes through varying their mass, while many contemporary commercial bells are machine lathed. The bells exhibited here have been all been masterfully cast, or found and repurposed.

Nick Diphillipo’s now life long interest in the profession of metal casting accompanying a passion for sound and music found a natural union in bell creation. An early interest in architecture led him to Paolo Soleri’s experimental urban project Arcosanti in Arizona. The project was partially funded by the manufacture of bronze wind bells at a foundry on site. This led to a sideways career switch from buildings to metal casting; eventually managing the foundry there and embarking on an exploration of bell design.

Nick spent last few decades learning and practicing the metal casting craft and developing techniques and designs in bell making. He is currently the Foundry Dept. Head at The Crucible in Oakland Ca. where, among other things, he teaches an annual class in bell making and is the casting director at Artworks Foundry in Berkeley Ca.

Brenda Hutchinson is a composer and sound artist whose work is based on the cultivation and encouragement of openness in her own life and in those she works with. Through her work with large-scale experiments in socially based improvisations and interactions, Brenda has developed a body of work based on a perspective about interacting with the public and non-artists through personal, reciprocal engagement with listening and sounding.

Tay Gersbach is an Artist, Musician and Educator living in El Cerrito, CA. As a graduate of California College of the Arts (Individualized, BFA 2015) she studied bridging the gaps between art and music through Sculpture, Community Art, and Sound.  Taylor teaches Wood Shop at Aurora School, and private instruction in drawing/painting, prop shop,  printmaking, ceramics, ukulele, songwriting and voice. When she is not teaching, you would find her Directing the monthly event, Bay Area Arts Mixer (BAAM), performing with her band Tay and the JangLahDahs, and engineering music and music videos as JangleTown Productions.

Bart Hopkin is maker of acoustic musical instruments and a student of musical instruments worldwide. From 1985 to 1999, he edited the quarterly journal Experimental Musical Instruments. The journal served as an essential resource and clearing house in an otherwise scattered but lively and growing field. During those year and in the years since, Bart has written over a dozen books on instruments and their construction. In recent years, Bart has focused more than ever on the making of one-of-a-kind musical instruments, assembling a collection of well over a hundred unique types (to see them, visit www.barthopkin.com). In his work as an instrument maker, Bart’s primary interest has been in exploring diverse acoustic systems. His Savart’s Wheel, a tuned, motor-driven scraper with a range of over two chromatic octaves, is one of the most irritating musical instruments ever devised.

Paolo Soleri (21 June 1919 – 9 April 2013) was an Italian architect, designer and inventor of the wind bell with features a sail on the clapper. He established the educational Cosanti Foundation and Arcosanti: an idealogical social sculpture blending art, ecology, architecture and social models. He finally won a National Design Award in 2006.

For 50 years, the Paolo Soleri Studios have produced a wide range of bronze and aluminum sculptural pieces renowned the world over. The bronze and aluminum foundry at both Cosanti and Arcosanti typically pour two to three heats, a hundred pounds of bronze a day, with an average of 50 bells a heat. Sand casting, lost Styrofoam and lost wax techniques are used to create large mobile-like bell assemblages. Custom pieces with both patina and burnished finishes are sought after by collectors and adorn public and private buildings, residences and art galleries around the world.

GRAMMY wining vocalist David Samas is a polymath composer, conceptual artist, instrument inventor, curator, poet, painter, shaman and permacultualist native to San Francisco. He has a BFA in Conceptual Art from the SF Art Institute, and is a certified hypnotist, sound healer and Reiki master. He has performed commissions at the SF Asian Art Museum, Berkeley Art Museum, Oakland Museum of California, SF Spiral Dance, Stanford’s Bing Hall and CCRMA, Grace Cathedral, the Exploritorium, The Lab, Safehouse for the Arts, Cal Shakes and the the Tenderloin National Forest.

He is director of Pet the Tiger, a Bay Area instrument inventors collective and curates the Window Gallery for invented Instruments at the Center for New Music SF. He is the founder and primary composer for of the Harmonic Series Gamelan and also performs in Gamelan Encinal, both in Just Intonation. He was curator for the Meridian Gallery’s Composers in Performance Series and the Turquoise Yantra Grotto and has been festival director for Thingamajigs and MicroFest North. David gives back to his communities through acoustic activism, the preservation of rare art and instruments and by teaching physics and math through instrument building in the Oakland School District.