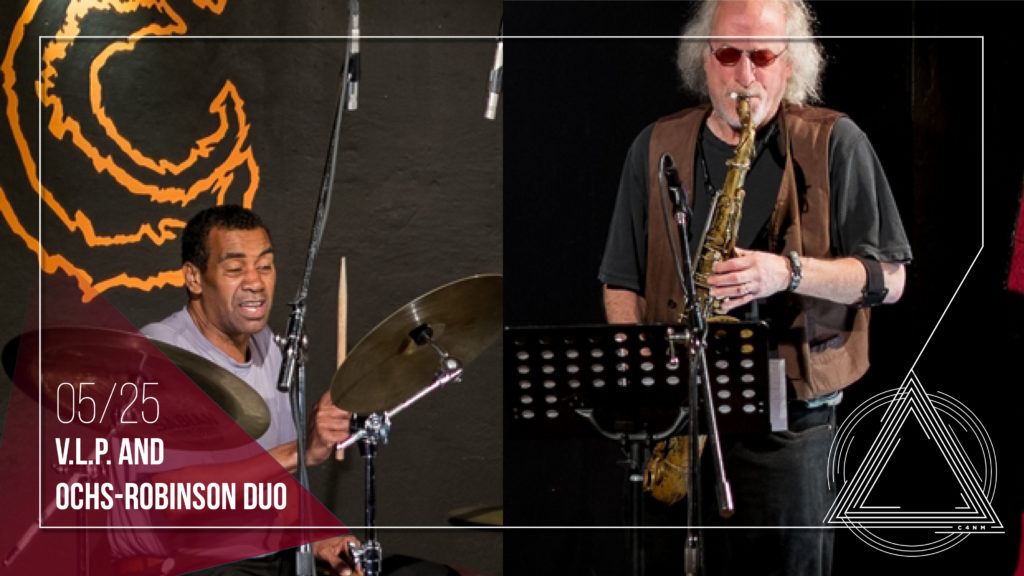 V.L.P. (Vlatkovich, Liebig, and Powell) and the Ochs-Robinsonn Duo team up for a double bill of free improvised music at Center for New Music.

While the band name V.L.P. may stir nebulous memory remnants of some progressive rock supergroup of a bygone era, it’s actually something of a creative jazz supergroup of this present era. V.L.P. stands for Vlatkovich, Liebig, and Powell, more completely trombonist Michael Vlatkovich, bass guitarist Steuart Liebig, and drummer-percussionist Garth Powell. What can be said about these three adept and distinguished artists? Each member of this aggregation is a veteran musician who has thoroughly demonstrated his aptitude for creative, spontaneous music-making, and this trio of heavy hitters, assembled with the idea of presenting some accomplished and adventurous improvised music, promises to bring it. – Alex Cline

Larry Ochs, Tenor and Sopranino Saxophone / Don Robinson, Drums
Performing together in various ensembles since 1991, Ochs and Robinson performed for the first time as a duo in 2011 in their hometown San Francisco Bay Area. At each of the first two concerts, an enthusiastic recording engineer offered them free access to his studio in the following months. As a result, the duo recorded a CD’s worth of music over that summer, and that is now released as The Throne (in January 2015 on the CD label Not Two). That material comprises much of the music they performed on tour in 2013, their first year performing together (as a duo) outside San Francisco.
Although Ochs and Robinson have collaborated in various groups for more than 20 years – including in the trio What We Live with bassist Lisle Ellis – their duo is a recent phenomenon, having developed over the past couple of years. Ochs says: “Our playing together has evolved to a really special place, I think. We’re definitely coming out of the tradition of horn-drum duos from John Coltrane & Rashied Ali to Wadada Leo Smith & Billy Higgins, but we’ve found our own space after a long stretch of shows together. Our set will include new, original material, with some high-energy playing and things that are more spatial, as well as some homages to more popular music. In a sparse setting like this, the music hits a listener right away – nothing is obscured, everything is clear.