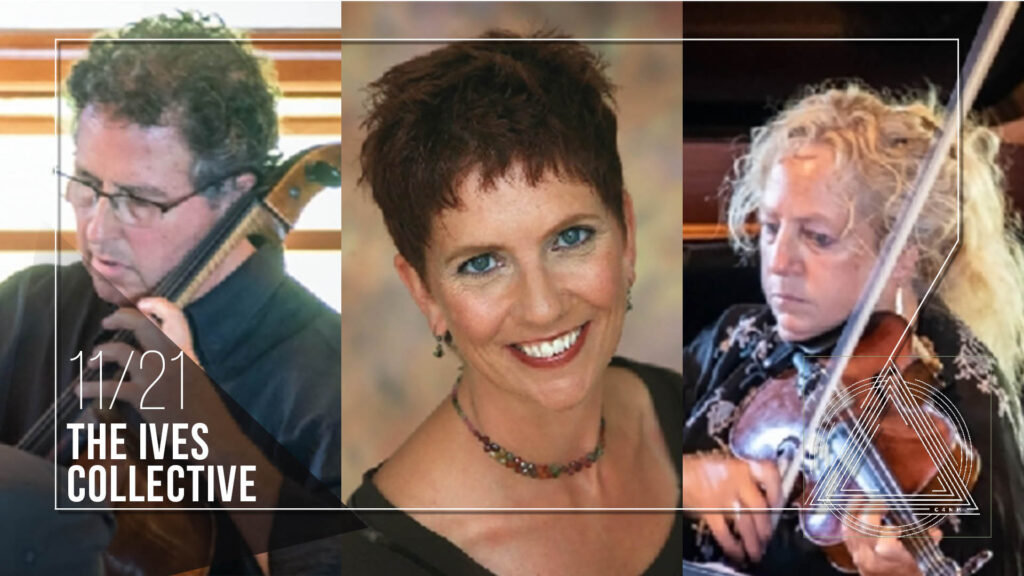 This is a pre-recorded performance broadcast on YouTube Live.

This concert is free. Donations to NACUSAsf are encouraged.

The San Francisco Bay Area Chapter of NACUSA presents “New Music for Strings & Piano” featuring members of the Ives Collective. The concert is free but donations to NACUSAsf are encouraged. Donations may be made at our website http://nacusasf.org/

The concert, which was recorded at the Center for New Music earlier in November, features three members of the Ives Collective: Susan Freier, violin & viola, Stephen J. Harrison, cello, and Lori Lack, piano. They will perform new duo and trio works by eight West Coast composers…

About the Ives Collective

The Ives Collective, formed in 2015 by Co-Artistic Directors Susan Freier and Stephen J. Harrison, following the disbanding of the Ives Quartet, is comprised of an impressive and ever evolving roster of musicians who bring together careers worth of experience at great music making organizations such as at the San Francisco Symphony, San Francisco Opera, San Francisco Ballet Orchestra, San Francisco Chamber Orchestra, New Century Chamber Orchestra, the Metropolitan Opera, San Francisco Contemporary Music Players, Opera Parallèle, and various university faculties and festivals. At the core of the Collective’s inspiration is its members’ joy in playing richly varied chamber repertoire with longtime friends and colleagues for eager concert attendees. For more information, refer to their website at http://ivescollective.org/ NACUSAsf is the San Francisco Bay Area Chapter of the National Association of Composers USA, a non-profit organization founded in 1933 by Henry Hadley. The San Francisco Chapter was founded by Nancy Bloomer Deussen and John Webber more than twenty years ago. Since then, NACUSAsf has evolved into an active organization with a peak membership of seventy-five composers. It produces four to six concerts a year in the San Francisco Bay Area. For more information, refer to our website at http://nacusasf.org/