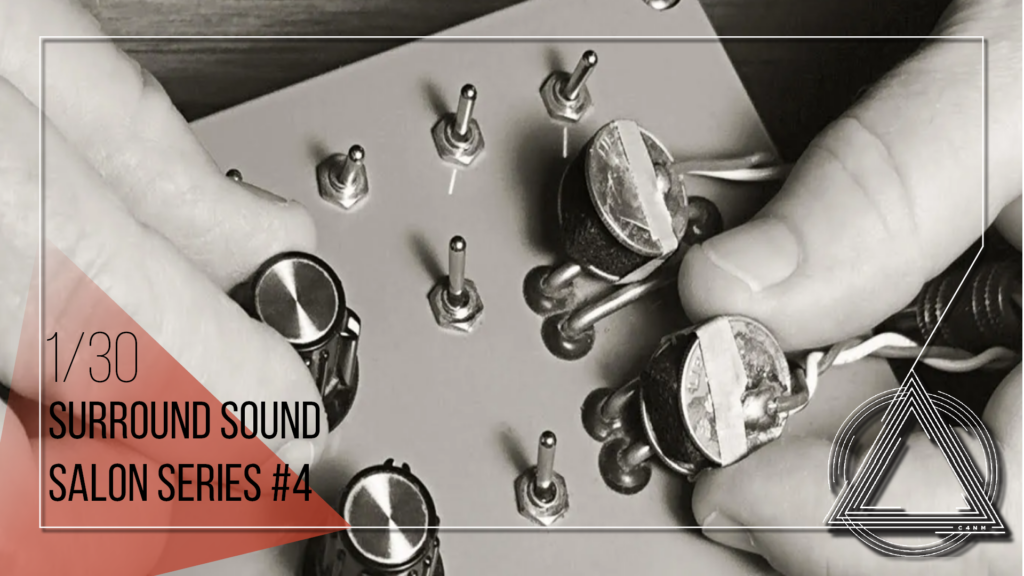 This event will be held in person at the Center for New Music.

Music by John Bischoff, All Vessels (Sally Decker and Brendan Glasson) and Chris Brown, realized by The Hub.

SSSS is a monthly, informal show at CNM in which electronic music composers present their fixed media and/or live electronic music through the 8-channel surround system, generously provided by Meyer Sound. The composers mix their sounds from the center of the space, and the audience is free to choose their own listening location, and to move within the space to hear the music from different vantage points. This concert celebrates the CD release of John Bischoff’s Bitplicity on ArtifactRecordings, with copies for sale at the show.

PROGRAM:
1) John Bischoff Bitplicity
Bitplicity combines the wild outback of hands-on analog circuitry with the more formal properties of digital synthesis. This fixed media version maps the inherent 12-voice structure of the piece onto the Center’s multi-channel environment so that shifting voice activation patterns are uniquely projected in space.  The very ground of each event in this music is a physical interruption—-a disturbance in a continuous tone or silence. The usual electronic music preferencing of an acoustic-style envelope—-the shaping of an attack followed by subsequent sustain and then release—-is replaced by an ever-present potential for either sudden sound or sudden silence. The artifacts accompanying these transitions provide a site for sonic ornamentation—-unpredictable edges of sound that balance the overly formal interior of electronic tone production.

All Vessels is Sally Decker and Brendan Glasson. Sally and Brendan explore relationships of sounds. With synthesizers, organ, and electronic feedback, their first collaborative release, “An Opening” (Full Spectrum, 2020), sought to create a harmony not of pitches but of forces—weak/strong, energetic/subdued, steady/chaotic. In a recent piece composed for the High Desert Soundings festival, they examined dependence, independence, and interdependence with tape, reed organ, electronics, and acoustic feedback. The duo is creating a new multichannel work for the Surround Sound Salon Series.

VAV was inspired by congruencies between associations of the hebrew letter vav and the musical practices of The Hub. The association of vav with the principle of connection is embodied in a music in which every sound is connected to every other one through the exchange of binary data (bits). The association of vav with a pillar, and of the six spatial pillars of three-dimensional space, is represented in the spatial movement of sound, encoded ambisonically to ascend in trajectories towards a middle point, centered and above the installation floor. The association with the number six is reflected in the six players of the group who provide six sound sources for the piece, that plays through six loudspeakers of the surround installation. VAV creates a meditative, three-dimensional soundscape entirely from mathematically synthesized sound that reflects on the symmetries of space and time, concealment and revelation. The Hub players are John Bischoff, Chris Brown, Tim Perkis, Mark Trayle, Phil Stone, and Scot Gresham-Lancaster.

SSSS is curated by Chris Brown. Send proposals including title to present surround sound pieces in future shows to: cbmuse@gmail.com. Proposal requirements include: 1) Title and duration of the piece (must be less than 20 minutes); 2) a short bio of the composer; 3) a link to a stereo version of the piece.

John Bischoff (b. 1949, San Francisco) is an early practitioner of live computer music. He is known for his solo constructions in real-time synthesis as well as the development of computer network music. He was a founding member of The League of Automatic Music Composers (1978), considered to be the world’s first computer network band. He is also a founding member of The Hub, a network band that began in 1986 and continues to expand on the network music form today. Recordings of Bischoff’s work are available on ArtifactRecordings, 23Five, Tzadik, Lovely, and New World Records. He is a recipient of an Artist Grant from the Foundation for Contemporary Arts (NY) in 1999. As a member of the Hub, he was awarded a GigaHertz Prize for life-time achievement in electronic music in 2018 by ZKM in Karlsruhe, Germany. He was on faculty of the legendary Music Department at Mills College for many years.
www.johnbischoff.com

Sally Decker is a composer, performer, and writer based in Oakland, CA. Her work explores the subtle emotional body and sound as a vessel for practicing presence. Her approach to form and process is psychological and sensory, rooted in the intent of strengthening a reflective focus toward our internal intuitive worlds. Recent interests include feedback systems, the voice, and utilization of language in performance. Her full-length album In The Tender Dream was released in August 2020 on NNA Tapes. She received her MFA in 2019 in Electronic Music & Recording Media from Mills College, where she studied with Laetitia Sonami, Maggi Payne, James Fei, Zeena Parkins, John Bischoff, and Fred Frith. https://sallydecker.net/

Brendan Glasson (b. 1985, Providence RI) works with sound, video, and text. He lives and works in Oakland, CA. His work speaks to impermanence through examinations of longevity, perception, and minutia. Brendan has performed and shown work at Centre Pompidou-Metz, RISD Museum, MUDAM Museum, Contemporary Jewish Museum, the Lab, and more. He holds an MFA from Mills College, where he studied with Maggi Payne and John Bischoff. He is the Technical Director of the Center for Contemporary Music at Mills.

Chris Brown, composer, pianist, and electronic musician, makes music with self-designed sonic systems that include acoustic and electroacoustic instruments, interactive software, computer networks, microtonal tunings, and improvisation. His compositions are designs for performances in which people bring to life the musical structures embedded in scores, instruments, and machines. Throughout his career he has composed solos for computer and for acoustic instruments with interactive electronics using self-authored software. Since 2005 he writes music in Just Intonation, also integrating rhythmic structures that parallel the proportions used in their tunings. He taught electronic music and composition as Co-Director of the Center for Contemporary Music at Mills College in Oakland, California for 30 years. http://cbmuse.com