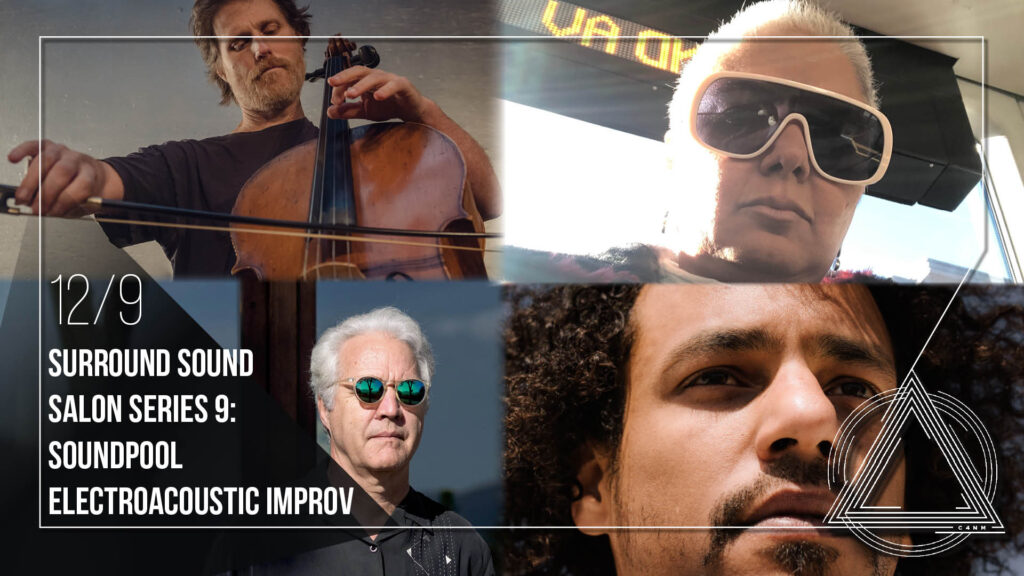 The Surround Sound Salon Series (SSSS) is a monthly show at CNM where composers present their music through an 8-channel surround system, generously provided by Meyer Sound. SSSS#9 Sound Pool is a live improvised performance by four composer/performers sharing a dynamically shifting 8-channel sound system. The creative musicians are: Zachary James Watikins, electonics, Ava Koohbor, electronics; Ben Davis, cello, and Chris Brown, virtual piano & electronic mix. The performance is continuous and lasts exactly one hour, and the audience is free to choose their own listening location, and to move within the space to hear the music from different vantage points.

The performance is continuous and lasts exactly one hour, and the audience is free to choose their own listening location, and to move within the space to hear the music from different vantage points. Aside from a simple structure of solos, duos, trios, and quartets to change the density —there is no prearranged score or any restriction on what sounds to play.

ZACHARY JAMES WATKINS studied composition with Janice Giteck, Jarrad Powell, Robin Holcomb and Jovino Santos Neto at Cornish College. In 2006, Zachary received an MFA in Electronic Music and Recording Media from Mills College where he studied with Chris Brown, Fred Frith, Alvin Curran and Pauline Oliveros. Zachary has received commissions from The Switch Ensemble, Density512, the Beam Foundation, sfsound, The Living Earth Show, Kronos Quartet and the Seattle Chamber Players among others. His 2006 composition Suite for String Quartet was awarded the Paul Merritt Henry Prize for Composition and has subsequently been performed at the Labs 25th Anniversary Celebration, the Labor Sonor Series at Kule in Berlin Germany and in Seattle Wa, as part of the 2nd Annual Town Hall New Music Marathon featuring violist Eyvind Kang. Zachary has performed in numerous festivals across the United States, Mexico and Europe. Zachary releases music on the labels Sige, Cassauna, Confront (UK), The Tapeworm and Touch (UK). Novembre Magazine (DE), ITCH (ZA), Walrus Press and the New York Miniature Ensemble have published his writings and scores. Zachary has been an artist-in-resident at the Espy Foundation, Djerassi, the Headlands Center for The Arts and the Amant Foundation Siena, Italy.222. http://zacharyjameswatkins.com

AVA KOOHBOR is an interdisciplinary artist. Through sound, words, and objects she tries to find balance in everyday chaos. Her latest performance was a sound contribution to Chris Brown & Johanna Poethig’s realization of David Ireland’s score, A Variation on 79, Side to  Side Passes of a Dumbbell, Dedicated to the Memory of John Cage.  Her latest publication, a collection of poetry, Death Under Construction has been published by Ugly Duckling Presse. She is now pursuing an MFA in Electronic Music and Recording Media at Mills College. https://avakoohborarts.com/

BEN DAVIS (cello) Ben Davis has been concentrating on fusing his classical, jazz and contemporary music experiences into a raw vehicle of acoustic expression. He started improvising while playing for dancers in Earthfall Dance UK, then following gigs with Evan Parker, Louis Moholo, Vincent Courtois and Wadada Leo Smith, Ben developed a freer approach to improv which he utilized while playing and recording with Ingrid Laubrock, Simon Nabatov and Bobby McFerrin. His own group Basquiat Strings collaborated with Ellery Eskerlin in the BBC Electric Proms and was nominated for the Mercury Music Awards 2007, during which time he was a member of the London based collective F-IRE and subsequently collaborated individually with many of its artists. More recently Ben has been playing with Tomeka Reid, Mary Halverson, Ben Goldberg and was involved in the Mills College festival “In The Fault Zone” with Roscoe Mitchell and Nichole Mitchell.  https://youtu.be/0YAu2sheHtE

CHRIS BROWN (piano&electronics) makes music with self- designed sonic systems that include acoustic and electroacoustic instruments, interactive software, computer networks, microtonal tunings, and improvisation. His compositions are designs for performances in which people bring to life the musical structures embedded in scores, instruments, and machines. His early work featured electroacoustic instruments he invented and built, like the Gazamba (1982), an electric percussion piano featured in Alternating Currents (1984), for the Berkeley Symphony and three soloists. He designed and built his own computer-controlled analog signal-processing system for the environmental sound piece Lava (1992), for brass, percussion, and live electronics. Talking Drum (1995-2000), was a MIDI network installation that explored polyrhythm, distance, and resonance in large architectural spaces. He is a member since 1986 of the pioneering computer network music band The Hub, which received the 2018 Giga-Hertz Award for Lifetime Achievement in Electronic Music from ZKM, Karlsruhe, Germany. Throughout his career he has composed solos for acoustic instruments with interactive electronics using software he writes for his compositions and improvisations. Since 2005 he has written music in just intonation, often integrating rhythmic structures that parallel the proportions used in their tunings. Recordings of his music are available on New World, fo’c’sle, Tzadik, Pogus, Intakt, Rastascan, Ecstatic Peace, Red Toucan, Leo, and Artifact Recordings. He has also performed and recorded music by Henry Cowell, Luc Ferrari, José Maceda, John Zorn, David Rosenboom, Larry Ochs, Glenn Spearman, and Wadada Leo Smith; as an improvisor he has performed and recorded with Pauline Oliveros, Fred Frith, the Rova Saxophone Quartet, William Winant, and Frank Gratkowski.. From 1990-2018 he taught electronic music, theory, composition, world music, and contemporary performance practice as Professor of Music and Co-Director of the Center for Contemporary Music (CCM) at Mills College in Oakland. https://cbmuse.com