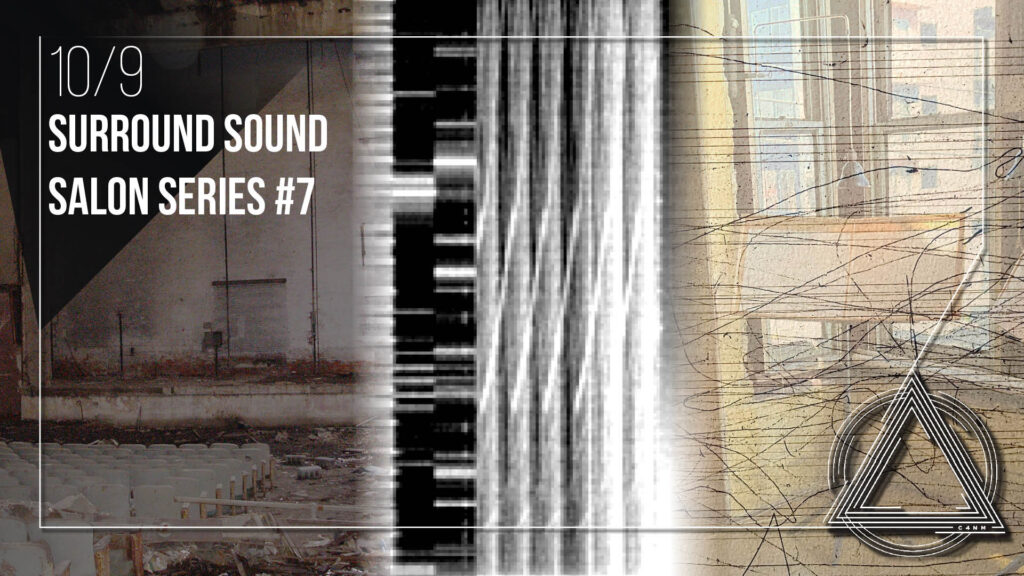 SSSS is a monthly, informal show at CNM in which electronic music composers present their fixed media and/or live electronic music through the 8-channel surround system, generously provided by Meyer Sound. The composers mix their sounds from the center of the space, and the audience is free to choose their own listening location, and to move within the space to hear the music from different vantage points. This concert features music by John Bischoff from his just-released album “Surface” on Artifact recordings; “The Secret Opera” by David Michalak ; and three microtonal pieces by Chris Brown, from his recent performance of graphic scores by the artist David Ireland.

This show headlines the new album release “Surface” by John Bischoff, on Artifact Recordings, https://artifactrecordings.bandcamp.com/ CDs will be available for purchase at the show.

The music was created in the mid-1990s and is related to his album “The Glass Hand” from the same period. The pieces are the result of extensive experimentation using real-time MIDI System-Exclusive codes to drive synthesizers into noise states of varying qualities. As MIDI note-on messages pummel the synthesizer 10 times a second, Sys-Ex messages sent in tandem alter the synthesizer’s voice definition—picture a bell continuously struck while imagining its shape is deformed in any dimension. The pieces were composed for live performance and therefore recorded in studio in real-time in one pass. For this concert Bischoff has arranged the stereo recordings for diffusion in 8 channels.

“Imagine a rolling landscape divided into areas of differing surface texture. A vehicle speeds over the landscape, the wheels generating continuous noise in contact with each surface. At area boundaries the noise quality shifts suddenly. The vehicle is silent, the surface sound all encompassing.” — from the CD program notes

Bio: John Bischoff (b. 1949) is an early practitioner of live computer music. He is known for his solo constructions in real-time synthesis as well as the development of computer network music. His recent performances combine hands-on analog circuitry and digital synthesis in open dialog. His focus continues to be on material properties elicited from the electronic instrumentation, highlighting mechanisms either built-in or fabricated by the composer through play and investigation.

An Opera singer, Grum, excited by his debut, develops this joyous habit of mimicking the sounds of his surroundings, matching pitches and singing back to the sounds of everyday life. As he walks to his performance on opening night he is lured by the sound of a woman’s voice. It’s coming from a movie theater where he is seduced by the image of Aleyesha’s eyes on the movie screen, rendering him speechless…still he must perform his opera and though his vocalizing contains the necessary emotion, he cannot form words. Some say it was anxiety. Others say it was an apparition; the hypnotizing eyes & voice of Aleyesha that made him lose his words and left him doomed to vocalize his opera to a crumbling empty house, forever.

This is the first studio recording to include the Skatchbox, a musical invention by Thomas Skatchit. (A Skatchbox is a cardboard box with objects attached like toothpicks, nails & washers that are stroked or “played” with combs.)

Bio: David Michalak has been making films and performing since 1971. He plays lap steel guitar, phantom harp and the Skatchbox. He has founded T.D. Skatchit & Co., Reel Change, Ghost in the House and Dr. Bob playing on and engineering many recordings. His films have been shown at the Ann Arbor Film Festival, Castro Theater, Cannes Film Festival, The Roxie Theater and many other less impressive venues.

Chris Brown “Three Pieces for David Ireland” In July 2022 Chris Brown was commissioned to give the premiere performance of artist David Ireland’s five graphic scores “A Variation on 79, Side to Side Passes of a Dumbball, Dedicated to the Memory of John Cage (1912-1992)”. The performances took place on the second floor of the David Ireland House at 500 Capp St. in San Francisco and was performed by Brown, and artists Johanna Poethig and Ava Kohboor. Sounds created by all three in the house were sent to Brown for mixing, electronic signal processing and spatialization through six loudspeakers located in different rooms while the audience moved freely through the house. Brown composed three pieces for electronic piano for the premiere that are presented here in 8 channel surround. The pieces “Dropping”, “Cleaning”, and “Summing” each uses a different Just Intonation tuning system: Brown’s “Ragamala”, with 24 notes per octave; Harry Partch’s Chromelodeon’s 43-tone per octave tuning; and Lou Harrison’s Ptolemy Duple16 note per octave tuning. Each piece uses programmed interactive data feedback networks to steer the mixing, processing and spatialization algorithms of a live sampled, electronic piano. Bio: Chris Brown, composer, pianist, and electronic musician, makes music with self- designed sonic systems that include acoustic and electroacoustic instruments, interactive software, computer networks, microtonal tunings, and improvisation. His compositions are designs for performances in which people bring to life the musical structures embedded in scores, instruments, and machines. His early work featured electroacoustic instruments he invented and built, like the Gazamba (1982), an electric percussion piano featured in Alternating Currents (1984), for the Berkeley Symphony and three soloists. He designed and built his own computer-controlled analog signal-processing system for the environmental sound piece Lava (1992), for brass, percussion, and live electronics. Talking Drum (1995-2000), was a MIDI network installation that explored polyrhythm, distance, and resonance in large architectural spaces. He is a member since 1986 of the pioneering computer network music band The Hub, which received the 2018 Giga-Hertz Award for Lifetime Achievement in Electronic Music from ZKM, Karlsruhe, Germany. Throughout his career he has composed solos for acoustic instruments with interactive electronics using software he writes for his compositions and improvisations. Since 2005 he has written music in just intonation, often integrating rhythmic structures that parallel the proportions used in their tunings. Recordings of his music are available on New World, fo’c’sle, Tzadik, Pogus, Intakt, Rastascan, Ecstatic Peace, Red Toucan, Leo, and Artifact Recordings. He has also performed and recorded music by Henry Cowell, Luc Ferrari, José Maceda, John Zorn, David Rosenboom, Larry Ochs, Glenn Spearman, and Wadada Leo Smith; as an improvisor he has performed and recorded with Pauline Oliveros, Fred Frith, the Rova Saxophone Quartet, William Winant, and Frank Gratkowski.. From 1990-2018 he taught electronic music, theory, composition, world music, and contemporary performance practice as Professor of Music and Co-Director of the Center for Contemporary Music (CCM) at Mills College in Oakland. http://cbmuse.com