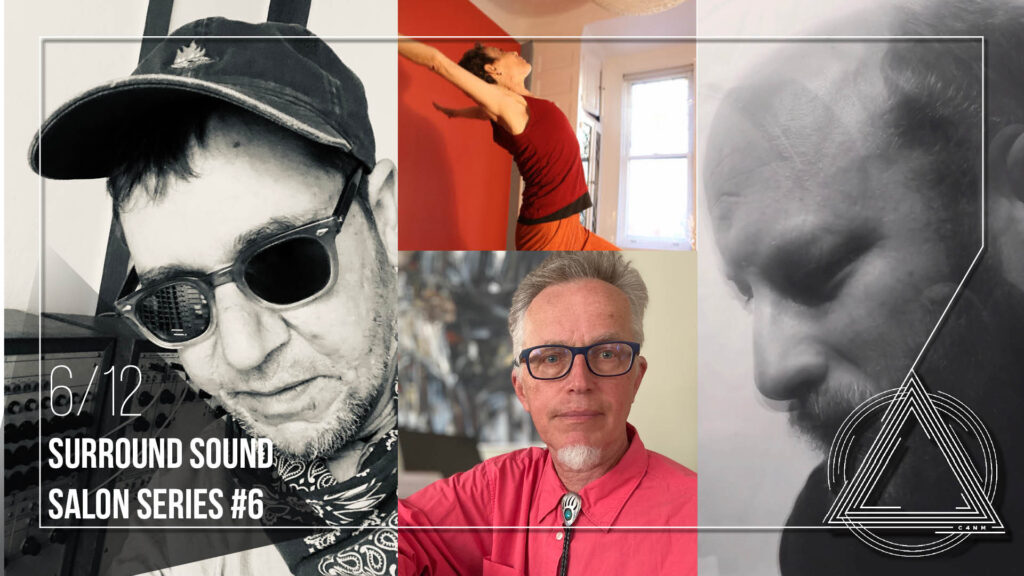 Music by Ted Allen with dance on video by Barbara Mahler; also music by Andy Evans, and ‘Lux Perpetua’ by Xopher Davidson.

SSSS is a monthly, informal show at CNM in which electronic music composers present their fixed media and/or live electronic music through the 8-channel surround system, generously provided by Meyer Sound. The composers mix their sounds from the center of the space, and the audience is free to choose their own listening location, and to move within the space to hear the music from different vantage points.

SSSS is a monthly, informal show at CNM in which electronic music composers present their fixed media and/or live electronic music through the 8-channel surround system, generously provided by Meyer Sound. The composers mix their sounds from the center of the space, and the audience is free to choose their own listening location, and to move within the space to hear the music from different vantage points.

Many of Ted Allen’s (b. 1957) compositions reflect his California upbringing in their invocation of California’s environment and social history. Ted’s California works include Mendocino Coast September 2020 for chorus, the electronic piece South Fork Kings River, May 2021 and all the repertoire for his electro-acoustic sextet, The Incendiary Cycle.
Ted’s music has been performed by San Francisco Choral Artists, San Francisco Bach Choir, San Francisco Girls Chorus, San Jose Choral Project, New Jersey All State Chorus, Galax Quartet, and the University of South Dakota Chamber Orchestra. His string metal composition, Fire in the Forge, is a best seller in the school music market. Dozens of school orchestras have uploaded their performances of the piece to YouTube. His work has been supported by ASCAP Grants to Young Composers, Meet the Composer, New York Foundation for the Arts, and IntermusicSF.

After completing his education at Pomona College and the Yale School of Music, Ted spent 10 years in the music business in New York City. He returned to California in 1991, where he wrote video game scores and contributed two orchestrations to the Metallica/San Francisco Symphony collaboration S&M. In 1999, Ted embarked on a 22 year second career directing high school music ensembles.

Barbara Mahler is a long standing and active member of the NYC dance community, working as a choreographer, performer, movement educator, and body worker.

As a choreographer, she works with subtle and intricate movement, time and architecture. Her choreography is consistent with her teaching vision and work. Her passion is/has been the solo dance—its challenges, its simplicity. Her work has been seen during numerous NDA Performance Mixes, with Movement Research at the Judson Church, at JCPA, Queen’s Theater, and Flushing Town Hall, Queensboro Dance Festival, Green Space, DTW, BKSD, Brooklyn Arts Exchange, others.

Barbara has been an ongoing faculty member with Movement Research since 2005, her process and products receiving support as an ongoing faculty member. She was a 2001 and 2006 Movement Research Artist-in-Residence. She has been an Artist-in-Residence in Conception, Chile, Gothenburg, Sweden, and Brooklyn Studios for Dance. Barbara was a recipient of an NDA Lift Off Residency and a recipient of two NDA Satellite Pandemic Residencies, creating snippets of dances for future projects. She was a guest with Adrienne Clancy Dance Works, a guest teacher at the University of Milwaukee, the University of Minnesota and at Wilson College, Pennsylvania. She has been a frequent visitor to Minneapolis for teaching and performing. As a teacher and body worker (Zero Balancing), she has traveled in the US and internationally to Canada, Asia, Europe, Scandinavia, South America, and Iceland.

www.barbaramahler.net for more details and information, as well as class and workshop schedules/

Andy Evans grew up in Napa, California, and played cello since the age of six. He first became interested in synthesizers at age thirteen, having become a fan of Depeche Mode, Cause and Effect, and Enya. He learned Max/MSP and Supercollider at Mills College, where is currently wrapping up his first year as a graduate student.

Xopher Davidson’s work is an ongoing exploration into the material of sound , building his experiments in electronic sound from a basis in painting, photography, and film, and through an interest in electronic circuits going back to building radios and homemade circuits as a kid.Over a course of the last 11 years he has built and explored the sound world of a homebrew modular synthesizer comprised of surplus laboratory equipment: various oscillators, pulse generators, filters and an ‘analog computer. He has released 4 albums as ANTIMATTER : Transfixion, Antimatter Vs. Antimatter, Our Lady of the Skies, and Reset.