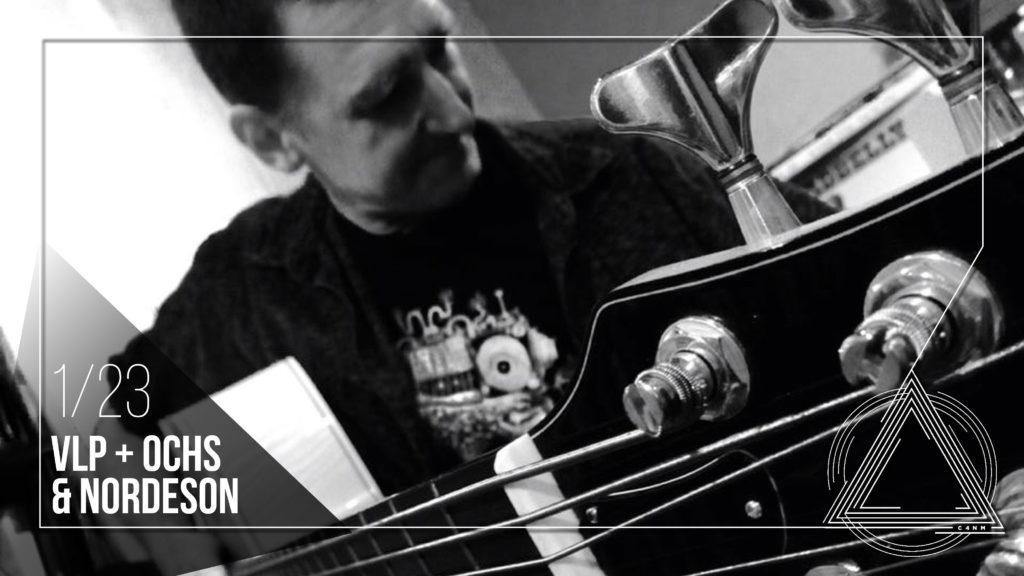 An evening of transcendent improvised music featuring both mastery and mystery provided by VLP (Portland’s Michael Vlatkovich on trombone, Southern California’s Steuart Liebig on bass guitars, and Garth Powell on drums and percussion), and Berkeley’s Larry Ochs on sopranino and tenor saxophones with Kjell Nordeson on drums.

About VLP
“Three masters on their instruments who know the path necessary to take in order to encompass a world of expression. They draw on their complete and varied skill sets to weave a sound tapestry, overseen by organic control factors and having the sensibility and sensitivity to operate as one unit creatively from the first note, flowing through an inspirational story line to the last note. Michael Vlatkovich, Steuart Liebig and Garth Powell: open your ears to their music.” – Larry Blood, Out Front, Outback, KZSC

Michael Vlatkovich, trombonist, composer and arranger, is one of the leading talents among Los Angeles improvisational players. Located on the West Coast since 1973, he is an emotionally charged performer, comfortable in a variety of jazz and world music styles. Vlatkovich has performed extensively in the United States, Canada and Europe. His improvisationally free music expresses raw power and beauty in a minimally structured format.

When prompted to talk about himself, electric bassist/composer Steuart Liebig will tell you that he has been playing and writing music for a long time, but that it’s more interesting to see what other people have said about him: “To say only that he plays bass would be misleading. As an improviser, he commands a shocking array of effects. As a composer, he can create rigorous but liberating frameworks . . . And mainly, he hears everybody else, assimilates it all and kicks it to another level.” “Liebig is equally at home charting lunar terrain as he is in the pocket.” “. . . nonpareil rethinker of electric bass . . .”
For the percussion arts, time, rhythm and pulse are undeniable, non-negotiable components of the craft. Yet, the sonic domain remains for many, a peripheral concern. Timbre is not only of equal importance; it is an integral part of the harmonic, melodic, and rhythmic construct. All four exist in the parallel subdivision of frequency and waveform. This relationship demands understanding, discipline and mastery. In Garth’s music, these elements are meticulously combined, creating a transcendent force enveloping the listener. Ultimately, we are drawn into the ecstatic and the inexplicable.

About Larry Ochs & Kjell Nordeson
Larry Ochs is an American jazz saxophonist, co-founder of the Rova Saxophone Quartet and Metalanguage Records. Ochs studied trumpet briefly but concentrated on tenor and sopranino saxophones. He worked as a record producer and founded his own label, Metalanguage Records in 1978, in addition to operating the Twelve Stars studio in California. He co-founded the Rova Saxophone Quartet and worked in Glenn Spearman’s Double Trio. A frequent recipient of commissions, he composed the music for the play Goya’s L.A. by Leslie Scalapino in 1994 and for the film Letters Not About Love, which was named best documentary at SXSW in 1998. He has played in a new music trio called Room and the What We Live ensemble. He has recorded several albums as a leader. He formed the group Kihnoua in 2007 with vocalist Dohee Lee and Scott Amendola on drums and electronics, which released Unauthorized Caprices in 2010.

Kjell Nordeson is a Swedish musician residing in California. As a percussionist and drummer he has toured and played around 1200 concerts in altogether twenty-six different countries within the last twenty years. He is featured on over fifty CDs. He has worked together with musicians such as (long time collaborator) Mats Gustafsson, Peter Brötzmann, Barry Guy, Stefano Scodanibbio, Joe Morris, William Parker, Mark Dresser, Larry Ochs, Sten Sandell and many others. Kjell participated in Derek Bailey’s Company Week in London, 1990. Kjell has worked as musician and composer in numerous theatre and contemporary dance performances at Sweden’s Dramaten (Royal Dramatic Theater), Riksteatern (National Theater), Stockholm’s Stadsteater (City Theater), and The Orion Theater in Stockholm.