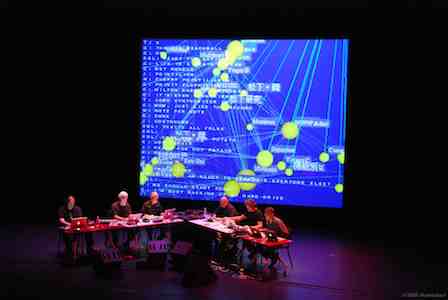 A rare opportunity to hear the band that pioneered laptop ensembles over twenty-five years ago. Functioning in the West Coast tradition of composer as instrument builder — redefining music from the ground up — The Hub makes music using electronic and digital systems of their own devising. Producing some of the most imaginative and compelling electronic music ever made, The Hub is perhaps the most infamous electronic ensemble since Musica Elettronica Viva. Although this influential Bay Area collective has performed worldwide in recent years and continues to break new ground in the ever-growing laptop medium, they had not played in San Francisco for almost a decade.
Formed in 1986, The Hub members are John Bischoff, Tim Perkis, Chris Brown, Scot Gresham-Lancaster, Mark Trayle and Phil Stone, with guest Matt Ingalls.
The Hub grew from the League of Automatic Music Composers: John Bischoff, Tim Perkis, Jim Horton, and Rich Gold. Perkis and Bischoff modified their equipment for a performance at The Network Muse Festival in 1986 at The LAB in San Francisco. Instead of creating an ad-hoc wired connection of computer interaction, they decided to use a hub – a general purpose connection for network data.
The Hub was the first band to do a telematic performance in 1987 at the Clocktower in New York.
Since this work represents some of the earliest work in the context of the new live music practice of Networked music performance, they have been cited as the archtypal network ensemble in computer music. The Hub’s best-known piece, Stuck Note by Scot Gresham-Lancaster has been covered by a number of network music bands, including MiLO- the Milwaukee Laptop Orchestra and BiLE- the Birminham Laptop Ensemble.
They have collaborated with Rova Saxophone Quartet, Nick Collins, Phill Niblock and Alvin Curran. They currently perform around the world after a multi-year hiatus, ending in 2004.