Warning: "continue" targeting switch is equivalent to "break". Did you mean to use "continue 2"? in /home/bearjen/apps/cnm2019/wp-content/plugins/types/library/toolset/types/embedded/includes/wpml.php on line 660
 sfSoundGroup + Davy Sumner's Synthbee Ensemble – Center for New Music
Keeping in mind the health and safety of our community, all in-person events at C4NM are canceled until further notice. However, our staff is still available by email, and all events are now hosted online. From our blog: Resources for Artists During the COVID-19 Outbreak
During these extraordinary times, donations are critically important to the continued survival of arts organizations. 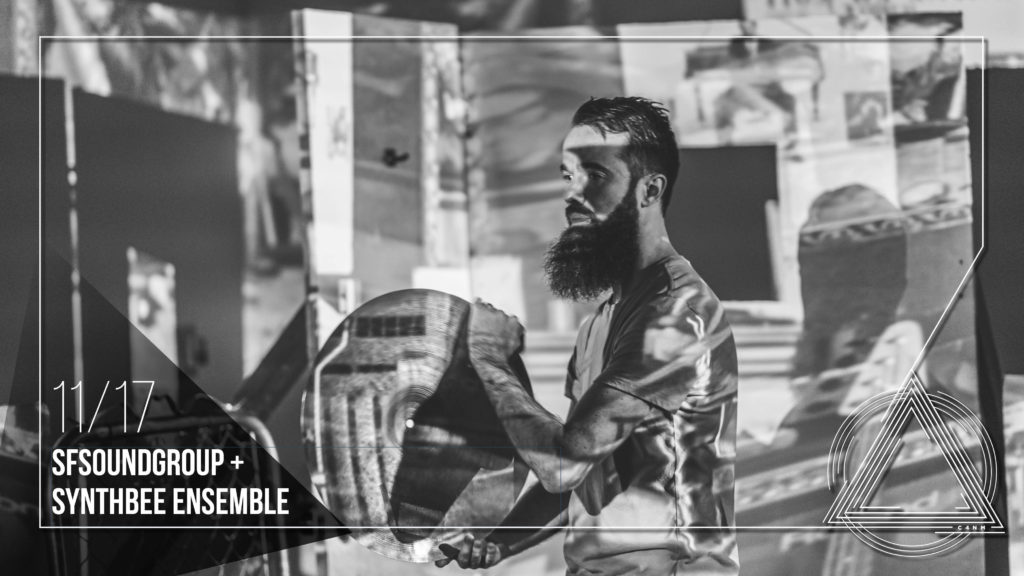 Since 2001, sfSound has proven to be one of the most fiercely innovative contemporary music organizations in the San Francisco Bay Area. Their performing ensemble, sfSoundGroup, perform original compositions, improvisations, new commissions, and standard New Music repertoire with an international scope and a distinctly West Coast spin — honoring, and striving to continue, the Bay Area’s critical historical role in the development of the American Experimental tradition. Their home concert series (sfSoundSeries) has presented a mix of solo, chamber, and large ensemble works, including conceptual and theatrical works and live electronic music, often emphasizing the continuum between notated composition and free improvisation. In addition, they present an annual 3-day festival of tape music (The San Francisco Tape Music Festival), host a 24/7 Internet radio station (sfSoundRadio), and frequently collaborate with other musicians and institutions in various projects.
What the heck is a Synthbee? Synthbees are handheld soundmakers that react to movement, touch, heat, light, color, and…other sounds! Designed to be used by musicians and non-artists alike, Synthbees encourage tactile exploration of both musical and extramusical group dynamics. Davy Sumner is an installation artist, experimental musician, producer, Maker, audio engineer, and educator based in Los Angeles. His creative works are spawned out of physics, biology, and sensory perception, often utilizing original electronics, spatialized audio, antiquated recording devices, repetitive movements, and feedback-based systems as key elements.