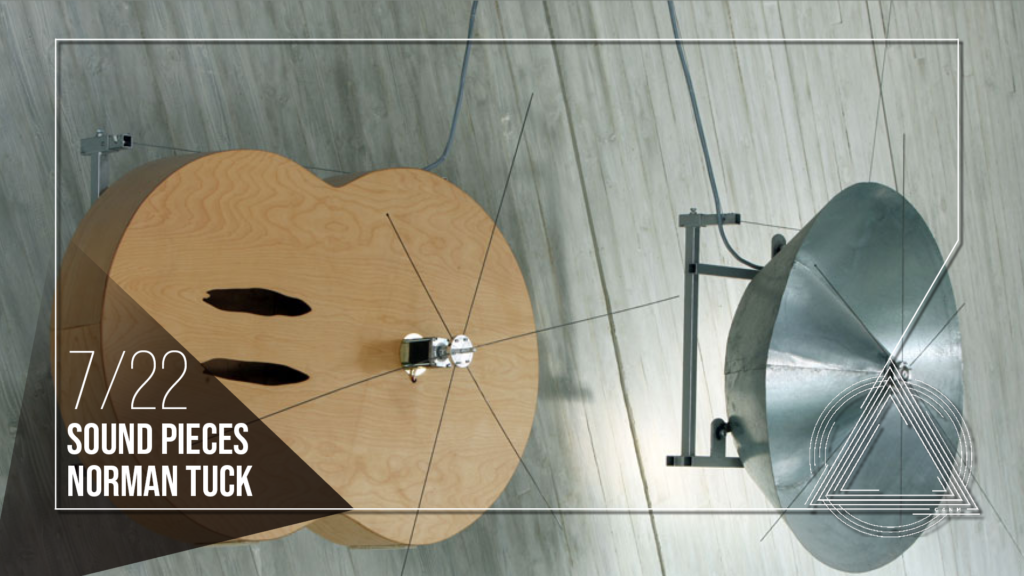 Join us for a free reception to celebrate the closing of window gallery exhibit Sound Pieces by Norman Tuck.

The Center is not running at full capacity, so tickets are required for in-person events.

The program will be available after the reception date on our YouTube Channel. Follow us to get notified when the link becomes available.

Sound is created by vibration. In the works chosen for exhibition at the Center for New Music listening as the various pieces vibrate is as intriguing as watching the source of the vibration.

Experimentation is the basis of my creative process. Occasionally I’ll notice an obscure phenomenon; a pattern that appears when a rod vibrates, the sound of a stepper motor. Curiosity may motivate me to construct an apparatus to explore what I have noticed. If all goes well the apparatus becomes a prototype to be developed until I decide that I can go no further. Then, I’ll either discard what I have made; or give it a name, take its picture, and preserve it in a wooden crate.

The years that I have spent working with my hands have enabled me to work confidently with wood and metal. However, I have no great gift for craftsmanship. Rather, I have been blessed with an ability to create objects that perform in a manner that entertains a viewer for more than a brief moment in time.

Norman Tuck has been exhibiting kinetic and interactive artwork since 1965. He received a B.F.A. in Sculpture from the University of Florida in 1967 and an M.F.A. from the Pennsylvania State University in 1972.

He moved to New York City in 1967 and followed a traditional New York artist’s trajectory of contributing to local group and solo exhibitions. In 1986 his work began to be primarily displayed internationally in science museums.

Tuck moved from New York City to San Francisco in 1994, and his newer work reflects that new, more lyrical environment.