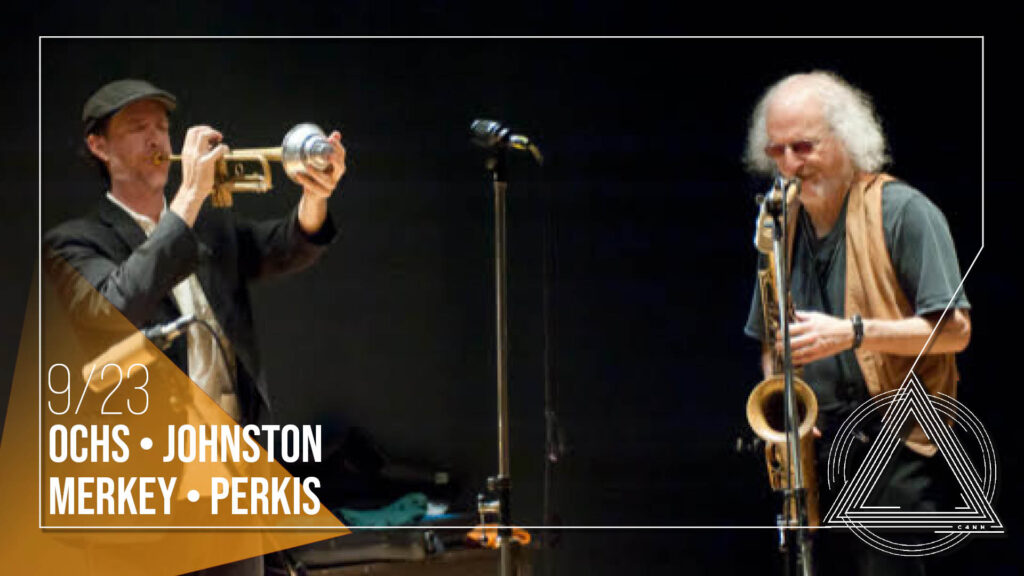 This concert will be streamed via the C4NM YouTube channel. Concert link will be emailed to ticket holders before the show.

Darren Johnston and his beautiful trumpet sound will be spending some time in the Bay Area in late summer 2021. Thus we are all afforded a rare chance to hear the reconvening of this stellar quartet featuring 2 sonorous electronics masters: Madalyn Merkey and Tim Perkis. If the 2019 and 2020 quartet shows are any indication of how high this music can take both the listeners and the musicians, please check out this live session on the C4NM YouTube channel.

MADALYN MERKEY is a composer and performer of live computer music based in the San Francisco Bay Area. Merkey creates sound events with elemental sonic material—voice, sine waves, and pulses—to generate lush synthetic environments with the aid of acoustic readings from microphones and sensors. Her recent work observes the principles of acoustic instruments and material spaces to design real-time sound synthesis programs. She has performed solo computer music compositions at Yale Union, Issue Project Room, and Block Cinema, and designed sound installations for Robert Irwin’s Central Garden at the Getty Center in Los Angeles. Check out her CD Oranges HERE: a selection of songs from various online performances presented in July and September of 2020.

TIM PERKIS is a well-known figure in the worlds of improvised and electronic music. He is also a founding member of several electronic music ensembles, including Fuzzy Bunny, Splendor Generator and the pioneering computer network band The Hub. Recordings of his music are available on the Artifact, Tzadik, New World and EMANEM labels, among others. His documentary film NOISY PEOPLE (2007) and NOISY PEOPLE podcast (2015) are available at noisypeople.net and perkis.com.

Since settling in San Francisco in 1997, Canada-born trumpeter/composer/songwriter DARREN JOHNSTON has collaborated and recorded with an extremely diverse cross-section of artists, yet always finds ways to be true to his own unique voice in each context. For example he has worked with straight-ahead jazz luminaries such as bassist/composer Marcus Shelby, to experimental icons like Rova Sax Quartet, Fred Frith and Myra Melford, to multiple tours with rising star, singer/songwriter Meklit Hadero, or traditional Balkan brass band giants Brass Menazeri. As a bandleader he has made his mark with the award winning The Nice Guy Trio, The Darren Johnston Quintet, the category defying Broken Shadows, Reasons for Moving, and more. Johnston was featured as one of Downbeat Magazine’s “25 Trumpeters for the Future,” and has been listed multiple times in the critic’s polls. His debut quintet recording, The Edge of the Forest received four stars by four very different critics in the Downbeat “Critics Polls,” and was given an honorable mention by the Village Voice for the top 10 CDs of the year. Johnston has a BA from the Cincinnati Conservatory of music, and an MFA in composition from Mills College. He has received commissions from dance companies such as Kunst-Stoff, Robert Moses’ Kin, and AXIS Dance, and from presenting organizations such as the De Young Museum, and the Yerba Buena Garden Festival; his music has been used in a few independent films. https://darrenjohnstonmusic.com