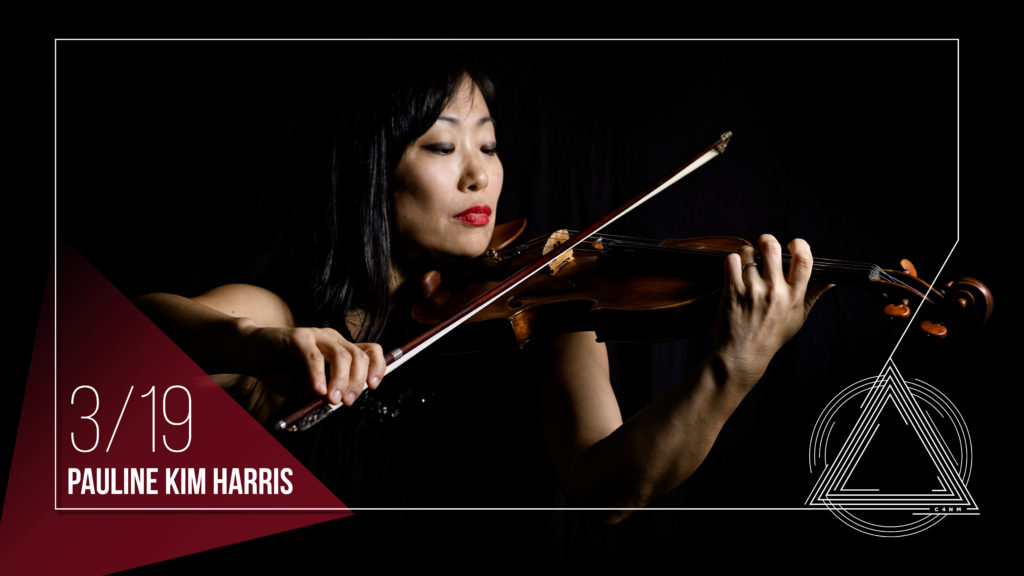 AMBIENT CHACONNE
A reimagining of the Chaconne from the Partita in D minor (BWV 1004) by J.S. Bach, composed by Pauline Kim Harris and Spencer Topel.

Ambient Chaconne is an immersive exploration of the J. S. Bach Partita No. 2 in D Minor: IV. Chaconne (BWV 1004). Unfolding over 42 minutes Ambient Chaconne blends live and pre-recorded violin with electronics. Using both human and machine transcription, the Chaconne serves as the structural underpinning to the work, appearing often as small disassociated fragments, and at other times in extremes: consisting of extended passages of sounded or silent materials. As with renditions of the Chaconne by past composers such as Brahms and Busoni, Ambient Chaconne extends the notion of transcription metaphysical, framing the Chaconne both as a musical composition and as a collective-subconscious memory.

DEO
A reimagining of Deo Gratias (ca. 1497) by Johannes Ockeghem.
Composed by Pauline Kim Harris and Spencer Topel
Deo is an acoustic-electronic transcription of Johannes Ockeghem’s stunning Deo Gratias devised as a complement to Ambient Chaconne. Notable as a 36-part canon, Ockeghem evokes singing of angels in heaven via an innovation on a traditional canon, using this ancient musical device as a kind of acoustic feedback delay. In essence, our Deo expands this idea of delays to a canon of thousands, in an ever-expanding and infinite soundscape, where the melodies eventually dissolve into resonance.

PAULINE KIM HARRIS
Pauline Kim Harris, aka PK or Pauline Kim is a GRAMMY™-nominated violinist and composer. The youngest student to have ever been accepted into the studio of legendary violinist Jascha Heifetz, she has since appeared throughout the US, Canada, Europe, Asia and Australia as soloist, collaborator, and music director. Currently known for her work with classical avant-punk violin duo String Noise with her husband, Conrad Harris of the FLUX Quartet, she has toured extensively with Orpheus Chamber Orchestra, has been a long-standing member of the SEM Ensemble and OstravskaBanda in the Czech Republic and has been a guest artist with leading new music ensembles such as Talea, ICE, Alarm Will Sound, Argento, TRANSIT, Object Collection, Glass Farm Ensemble, Ensemble LPR, Wordless Music and Ensemble Signal in New York City. Active in the experimental music scene, her work extends into interdisciplinary worlds, crossing boundaries and connecting visual art, electronics, media, film and dance to music. She has premiered and recorded works by Alvin Lucier, John Zorn, Philip Glass, Steve Reich, George Lewis, David Lang, Du Yun, Annie Gosfield and more.

SPENCER TOPEL
Spencer Topel is an artist and designer combining sound, installation, and architecture. He was educated at The Juilliard School, Cornell University, and later joined the faculty at Dartmouth College as a professor of music. There he collaborated with installation artist Soo Sunny Park on several projects including Capturing Resonance for the DeCordova Museum and Sculpture Park. This intersectional effort led Topel to develop a body of work over the past ten years combining sound, architecture, and performance. Most recently, Topel was Artist-in-Residence at The Yale Quantum Institute, where he and his team developed the first-ever quantum musical synthesizer.

ERIC LEISER
Eric Leiser is an award-winning artist, experimental filmmaker/animator, and holographer working in New York City. Born in California, he is an alumni of CalArts Experimental Animation and Art Programs. He creates intricate works of film, sculpture, holography and painting along with film installation integrating animation, painting, sculpture, holography and live performance.

A retrospective of Eric’s work is available online through art film distributor kinoscope.org, his feature films: Faustbook, Imagination, Glitch in the Grid and Apocalypsis are available on Netflix DVD, Amazon Prime, Itunes, Google Play, Youtube RED, MUBI, and the Lionsgate Shop. MoMA and the New Museum carry his films in New York. His films are also included in several museum collections internationally along with the filmmakers Co-op, Canyon Cinema and by contacting him through his website albinofawn.com, @ericleiser on Instagram.