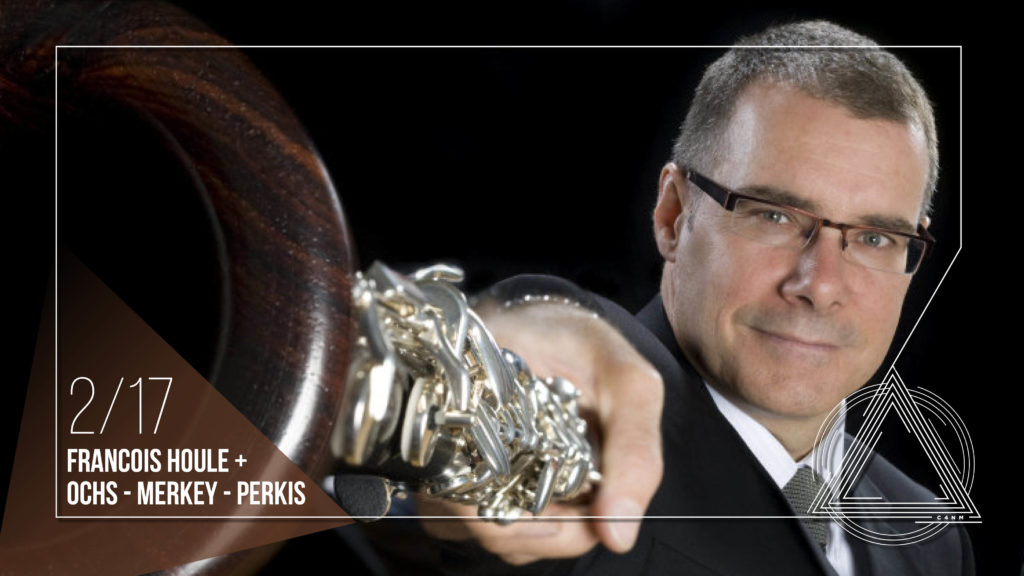 François Houle’s solo tour of the West Coast continues with his special-guest appearance here, playing for the first time with this now ongoing-trio of Bay Area improvisers. The hope here: to combine improvising sensibilities, setting each other up time and again to capitalize on structural possibilities that give rare and meaningful form to an otherwise very spontaneous music.

Clarinetist FRANÇOIS HOULE has established himself as one of today’s most inventive musicians, in all of the diverse musical spheres he embraces. Inspired by collaborations with the world’s top musical innovators, François has developed a unique improvisational language, virtuosic and rich with sonic embellishment and technical extensions. He has worked with Dave Douglas, Mark Dresser, Joëlle Léandre, Benoît Delbecq, Evan Parker, Samuel Blaser, Gerry Hemingway, Marilyn Crispell, Harris Eisenstadt, Michael Bates, Myra Melford, and many others. His extensive touring has led to solo appearances at major festivals across Canada, the United States, Europe and Australia. A prolific recording artist, he has released over twenty recordings as a leader, earning multiple Juno Award and West Coast Music Award nominations. He has appeared on numerous recordings on the Songlines, Red Toucan, Leo Records, Drip Audio, PSI, Between-the-Lines,Nuscope, Spool, hat[now]ART, Redshift, CRI, among others.

MADALYN MERKEY is a composer and performer of live computer music based in the San Francisco Bay Area. Her recent work observes the principles of acoustic instruments and material spaces to design real-time sound synthesis programs for site-specific performances. In 2015, Merkey translated the pioneer electronic music text, Due scuole di musica elettronica in Italia (1968) by composer Enore Zaffiri (b. Turin, 1928), from Italian to English. She first realized the audio portion of Zaffiri’s projects at Mills College in 2014 as part of her MFA thesis in Electronic Music. She then completed further research at the Conservatorio di Musica Luigi Cherubini in Florence, Italy. The translation, Two Schools of Electronic Music in Italy, is forthcoming from Die Schachtel.

TIM PERKIS is a well-known figure in the worlds of improvised and electronic music. He is also a founding member of several electronic music ensembles, including FuzzyBunny, Splendor Generator and the pioneering computer network band The Hub. Recordings of his music are available on the Artifact, Tzadik, New World and EMANEM labels, among others. His documentary film NOISY PEOPLE(2007) and NOISY PEOPLE podcast (2015) are available at noisy people.net and perkis.com.