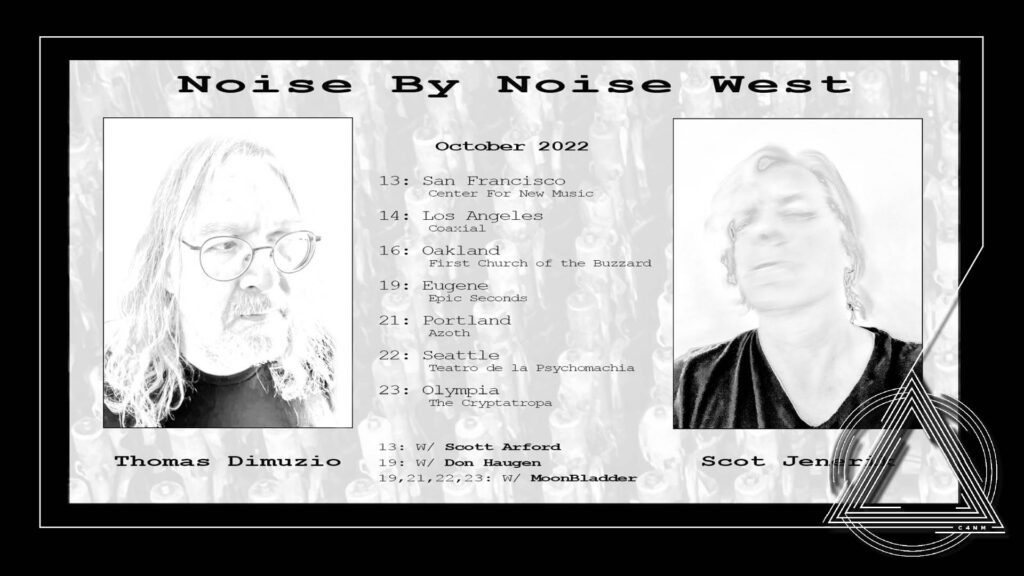 “It’s not that I hadn’t heard that before, it’s that I didn’t know it even existed.”

In the fall of 1998, Thomas Dimuzio and Scot Jenerik embarked on a stellar southwest and west coast tour. Opening the doors in many towns to sounds never before experienced. One enthusiastic admirer said “It’s not that I hadn’t heard that before, it’s that I didn’t know it even existed”. A lot has changed since then. Though Dimuzio and Jenerik have performed together on numerous occasions all over the world, they are getting back to their roots of their first tour together on the Left Coast, in 24 years.

Thomas Dimuzio is a musician, composer, improviser, sound designer, mastering engineer, label proprietor, and music technologist residing in San Francisco, California. Dimuzio’s music is like a sonic excursion transporting the listener to other worldly aural realms. “His work has a narrative, filmic tug that will draw you into its dark corners, ears alert… brilliant and rarely less than entertaining.” (Peter Marsh, BBC).

Scot Jenerik is a multidisciplinary artist/instrumentalist, instrument builder, composer and sound engineer. He has performed, lectured and distributed works extensively in the United States, Europe and Japan for over 30 years. He is co-owner of Mobilization Records; has an MFA from the San Francisco Art Institute; founded 23five Incorporated (the first non-profit arts organization in the US, dedicated specifically to the development and increased awareness of sound works in the public arena); and co-hosted the No Other Radio Network on KPFA.

Mr. Jenerik’s explosive performances, incorporating hand built instruments of metal and fire, are infamous both around his home of San Francisco/Portland and throughout the world. Combining elements of Kodo drumming, drone and noise, Jenerik transfers the intensity of physical performance into a throbbing soundscape of rhythms, drones and direct elemental contact. His most recent performances are exploring harmonies and harmonics through the non traditional use of traditional instruments from Turkey and India.

Mr. Jenerik’s recent recorded work has been the abstract, non-representational dark ambient project AUME (with Chrome and ex F-Space drummer Aleph Omega). All releases have a hand sculpted physical container which is integral to the work. An example of this is his solo release of an album made from cement that is playable on a turntable and is housed in a handcrafted hardwood box. In addition, his experimental short films have been shown in film festivals internationally. As of October 2019, he has rebooted F-Space (with Ethan Port of Savage Republic)

Scott Arford is one of the leading figures of new media arts in the San Francisco Bay Area. He has produced numerous works for sound and video including multichannel installations, live performances, CD and DVD projects. He was awarded an Honorable Mention in the 2005 Prix Ars Electronica. Arford has shown his in numerous venues including the San Francisco Museum of Modern Art; Dissonanze 7 in Rome, Italy; LUFF Festival in Lausanne, Switzerland; Observatori Festival in Valencia, Spain; the Sounding Festivals in Guangzhou, China and Taipei, Taiwan; the LEM festival in Barcelona, Spain; Liquid Architecture in Melbourne, Australia; the Festival de Video/Arte/Eolectronica in Lima, Peru; Sonic Light in Amsterdam; and the Center for Contemporary Arts in Kitakyushu, Japan.

Arford received a Bachelor of Architecture from the College of Architecture and Design at Kansas State University in 1991. He is currently an instructor at the California College of Arts in Oakland, CA.
In 1995 Arford founded 7hz, a warehouse/performance space. From 1995 to 2002, 7hz was San Francisco’s leading venue for noise and experimental music featuring numerous international artists including Francisco Lopez, Kit Clayton, Blechdom from Blectum, Zbignew Karkowski, The Haters, Mayuko Hino, and John Duncan. It still used as a studio and workspace for Arford and others.