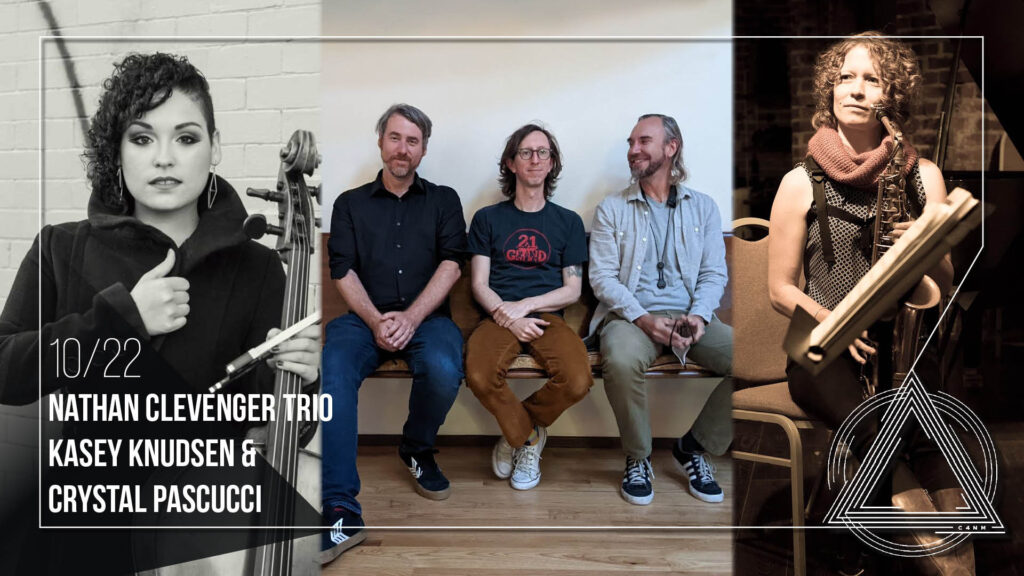 Oakland musicians Nathan Clevenger, Jordan Glenn, and Cory Wright share a long and entwined history of collaboration across various projects, including Wiener Kids, Ashen Cleric, and Fellow Hominids. In early 2021, in the depths of the Covid-19 quarantine, Nathan was asked to assemble a small ensemble for a socially distanced online music festival – the Karl Evangelista-curated Unsolitary Series – and this ensemble was born. Working from, between, and against Clevenger’s compositional frames and utilizing the multi-instrumental flexibility of each player, the trio weaves between non-idiomatic improvisation and often gnomic composed material, with focus on spaciousness and timbral detail. The trio has subsequently been presented at Indexical (Santa Cruz) and sfSound’s Mosswood Sound Series (Oakland). In October 2022, the trio will release their first full-length album, ‘Late Arcade.’

Our performance at SF Center for New Music will feature a set of music for trio followed by a set in which the trio will be joined by Kasey Knudsen (alto saxophone) and Crystal Pascucci (cello).

Nathan Clevenger
Nathan Clevenger is an Oakland born composer and multi-instrumentalist, working on the margins of modern composition, jazz, and improvisation. In 2022, Clevenger released ‘i had a dream about amnesia’, an album compiling 2 suites for solo, duo, and trio configurations, composed and recorded during the Covid-19 lockdown. The eight-piece Nathan Clevenger Group has released three albums, including ‘Stateless’ (2019, Slow & Steady Records). Current projects include a trio with Jordan Glenn & Cory Wright and the improvising chamber ensemble, Ashen Cleric. Notable recent performances include the premieres of extended compositions at the SF Contemporary Jewish Museum (‘for david berman’, performed by Ashen Cleric) and the Exploratorium (‘Ice Hours’, a multimedia collaboration with violinist/composer Kristina Dutton and artist Kim Miskowicz).

Jordan Glenn spent his formative years in Oregon and in 2006 relocated to the Bay Area where he received an MFA from Mills College. Since then he has been most closely associated with Fred Frith (FF Trio, Gravity Band), William Winant, Zeena Parkins (The Adorables), Roscoe Mitchell, Ben Goldberg, Todd Sickafoose, John Schott, Lisa Mezzacappa (avantNOIR, Glorious Ravage, Lisa Mezzacappa Six), Motoko Honda, Dominique Leone, Michael Coleman and the bands Jack O’ The Clock, Kyle Bruckmann’s Degradient, tUnE-yArDs, and the Oakland Active Orchestra. He has also worked with Rhys Chatham, Secret Chiefs 3, The Rova Sax Quartet, composer/bagpiper Matthew Welch and has been commissioned to create scores for evening-length dance pieces by Sharp & Fine and Liss Fain Dance. As a leader he has composed and conducted the trio Wiener Kids, Mindless Thing (a collaboration with poet Jim Ryan) and the percussion heavy large ensemble BEAK.

Reeds player and composer Cory Wright studied music at Oberlin Conservatory and the University of Southern California and has been involved in both the jazz and creative music worlds for the past 20 years, including time spent in New York, Los Angeles and his current home in the San Francisco Bay Area. His recent projects reflect his interest in blurring the distinction between composed and improvised music, and in combining the harmonious with the atonal, the grooving with the arrhythmic. Wright has performed in ensembles led by Anthony Braxton, Vinny Golia, Todd Sickafoose, Adam Rudolph and Yusef Lateef. He is currently a member of Bristle, the Nathan Clevenger Group, and Goggle (saxophone quartet) and leads his own projects Fellow Hominids and The Green Mitchell Trio.

Kasey Knudsen is a San Francisco-based saxophonist, composer & educator. She earned her Bachelor of Arts in Jazz Composition from Berklee College of Music in 2002. She has been dubbed “one of the region’s most esteemed saxophonists” (Andrew Gilbert, San Francisco Classical Voice, 2018) and has “quietly become one of the essential voices in the Bay Area jazz scene” (Andrew Gilbert, East Bay Express, 2014). Knudsen was included in a list of “10 Female Instrumentalists Who Redefine Jazz” by Alexa Peters of Paste Magazine (2016) and voted “One of the Best Female Jazz Musicians in the East Bay” (CBS, SF local Bay Area, 2013).

As a composer, Knudsen has been commissioned by the San Jose Jazz ‘New Works Festival’ to write a piece and create an accompanying film in response to the global pandemic (2021). In 2020, she was the recipient of InterMusic SF’s Small Chamber Music Grant, funding the debut album of the Kasey Knudsen Sextet. In 2013, Knudsen was commissioned by Intersection For the Arts to compose and perform an evening of new work featuring her original music. In 2008, Knudsen was featured in a series presented by the De Young Museum, showcasing her composition inspired by visual artist Deborah Oropallo. In 2005, she was commissioned by the California Jazz Conservatory’s Emerging Artist Series to present an evening of original music.

In addition to leading a number of her own projects, as a co-leader, she is involved in several groups including the Schimscheimer Family Trio, the Holly Martins, and the Klaxon Mutant Allstars. Knudsen collaborates frequently with many of the most unique musical voices in the Bay Area including multiple performances across the US and Europe with Tune-Yards, Fred Frith and the Gravity Band, the Charlie Hunter Quartet, Erik Jekabson, the Ian Carey Quintet + 1, Ben Goldberg, the Electric Squeezebox Orchestra, Beth Schenck, and many more.

Crystal Pascucci is a trained and practicing experimental and classical cellist, composer and free improviser. Pulling from influences that range from Bach, Kabalevsky, Miles Davis, John Cage and Morton Feldman, she composes for instrumental ensembles, collaborators and solo projects. Her music is often described as atmospheric, experimental and dramatic in nature, with a strong focus on harmonic and textural development.

A New York native, she attended collegiate classical music programs at University of Hartford’s Hartt School of Music and SUNY Fredonia. In 2011, she relocated to the West Coast for graduate studies at Mills College with Fred Frith and Roscoe Mitchell. It was here where her dedication to composition took root. She’s been commissioned by several ensembles including the Guerrilla Composers Guild for Boston based Transient Canvas, New York based Bent Duo, and the Composers Arranger and Performer Orchestra. She writes predominantly for her own ensembles, Inner Movements and Aunt Rose, as well as for her solo project.

As a performer, she is active in the contemporary and experimental music scenes, performing often with Roscoe Mitchell, Pamela Z, Paul Dresher Ensemble, Ned Rothenberg, the Mills Performing Group, Lisa Mezzacappa, Myra Melford, Ben Goldberg, Ellen Fullman, Mark Clifford, Jordan Glenn, Nathan Clevenger, CAPO and the San Francisco Contemporary Players. Through her relationship with SF’s Tiny Telephone Recording Studio, Crystal can be heard on more than 15 full length records of a wide range of artists. She’s also active as a curator of arts events and residencies (Lijiang Studio, Yunnan, China), an arts administrator and a dedicated teacher of chamber music at Oakland School for the Arts.