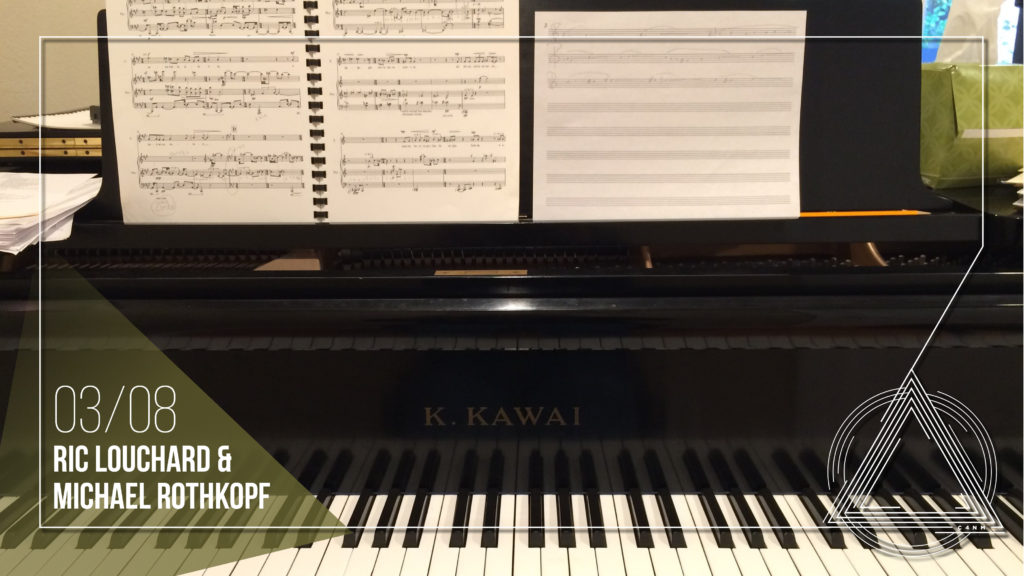 A program of music by featured composers Ric Louchard and Michael Rothkopf, performed by:

“I focus much of my creativity on melodic line, counterpoint, color and clarity of form. My creative work also embraces themes of time, perception and remembrance. I am fascinated by the many ways time is perceived in music, and how our remembrance of places and moments are tied to music. My work also explores combining and juxtaposing both traditional and experimental ideas in new and meaningful ways. Most recently, I have turned my attention to creating interactive works involving performers and computers. In these works I create performance environments and musical landscape that intensify improvisational and interpretive music making.”

Michael S. Rothkopf is a composer of over 50 works of chamber, electronic, orchestral and vocal music. His compositions have been noted for their “remarkable sensuousness” and their evocative ability to create a “sense of time and occasion.” Published by American Composers Editions, Rothkopf’s music has been performed by notable soloists, chamber musicians and ensembles such as William Anderson, Ulrich Eichenauer, Jean Kopperud, Tara Helen O’Connor, Cygnus Ensemble and the National Orchestra Association. He has been awarded fellowships from Yaddo, Carnegie Hall, the National Orchestra Association and Columbia University. Currently a Professor of Music at the University of North Carolina School of the Arts – School of Music, he teaches composition, music technology and other graduate courses. He lives in Winston Salem, North Carolina with his wife, Jeanne, his daughter Lydia and their cat, Cleopatra.

“Dr. Rothkopf’s handling of instrumental and electronic materials shows a high degree of virtuosity and his work is significant for two reasons: his music represents an evolution in the aesthetic possibilities of combining instruments and electronics, while at the same time he has developed technical solutions significant for the genre. His music is imaginative and original, and his interactive compositions are situated at the frontier where art and technology meet.” —Cort Lippe, Composer, Director – Hiller Computer Music Studios, University at Buffalo-SUNY

Ric Louchard:
“Each piece I write has its own logic and aural world. I most often strive for immediacy of expression. My goal is to make music that communicates clearly and strongly while being mysterious in its form and method. Like a powerful dream that changes us but we’re not sure what it means or where it came from.”

Ric Louchard is an active composer, pianist and piano teacher in the San Francisco Bay Area. He made five recordings of classical piano solos for children on the Music For Little People/Warner Brothers label. He has also been the director of the Traveling MusicSchool, which brings affordable music lessons to low income students as after school programs. He studied harpsichord with Fernando Valenti and piano with Adolf Baller and David Williams. He studied composition with Normand Lockwood and Allan Strange.