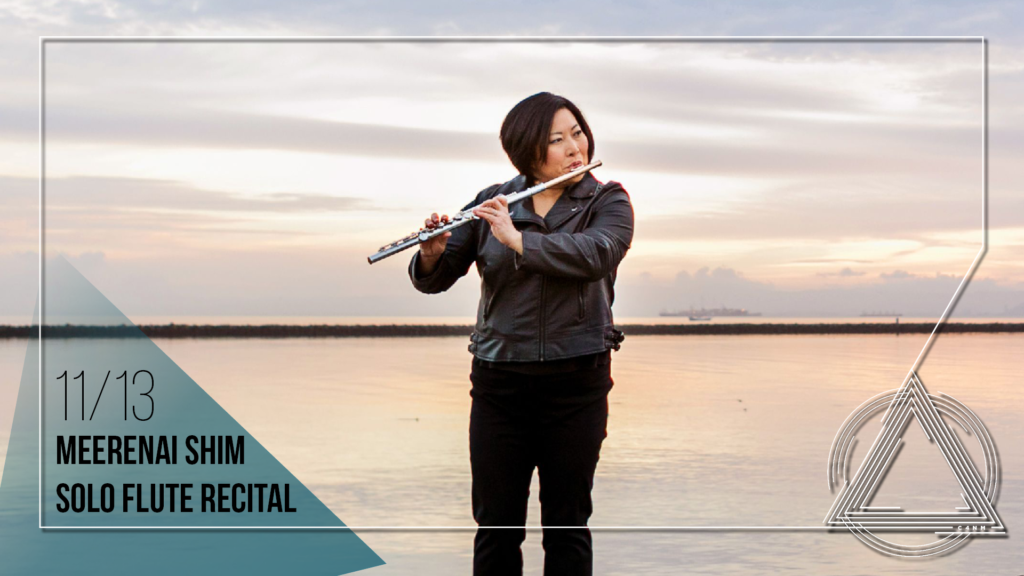 Former C4NM curator and flutist Meerenai Shim is delighted to return to the Center for New Music to premiere works by Andrea Reinkemeyer and Meerenai Shim. Also on the program are other unaccompanied works for one performer by Alice Jones, Janice Misurell-Mitchell, and Adolphus C. Hailstork.

“Wings to Air” for Solo Flute (2013) by Andrea Reinkemeyer was commissioned by, and is dedicated to, Natalie Haworth-Liu. The piece loosely follows the emotional trajectory of the grieving and healing process.

“On All Sides” (2020) is a graphic score piece for one performer in four movements by Meerenai Shim. The performer rotates the single-panel score 90 degrees for each movement. This piece is explores an idea Meerenai used in “Blueprint,” a location specific woodwind quartet written for the 2016 Soundwave Biennial.

About Meerenai Shim
Translated in Korean as “Milky Way” or “Galaxy”, the artistic career of Meerenai Shim (pronounced “ME-ren-ey”, like they) is appropriately expansive and all-encompassing. A flutist with a new music focus, she has commissioned dozens of new works through myriad channels, including as a solo performer, her chamber ensembles, her record label, and her own discography of three albums, all of which have been warmly reviewed. Based in Silicon Valley, Meerenai performs within two chamber ensembles: A/B Duo and contemporary flute trio Areon Flutes. Outside of performance, she founded the independent record label Aerocade Music in 2015, which has released one dozen albums to date of contemporary classical, electronic, and experimental music from the West Coast. Meerenai is also a Guild Certified Feldenkrais Practitioner(CM).