Warning: "continue" targeting switch is equivalent to "break". Did you mean to use "continue 2"? in /home/bearjen/apps/cnm2019/wp-content/plugins/types/library/toolset/types/embedded/includes/wpml.php on line 660
 Latitudes: Robert A. A. Lowe | IMA | Chris Duncan – Center for New Music
Keeping in mind the health and safety of our community, all in-person events at C4NM are canceled until further notice. However, our staff is still available by email, and all events are now hosted online. From our blog: Resources for Artists During the COVID-19 Outbreak
During these extraordinary times, donations are critically important to the continued survival of arts organizations. 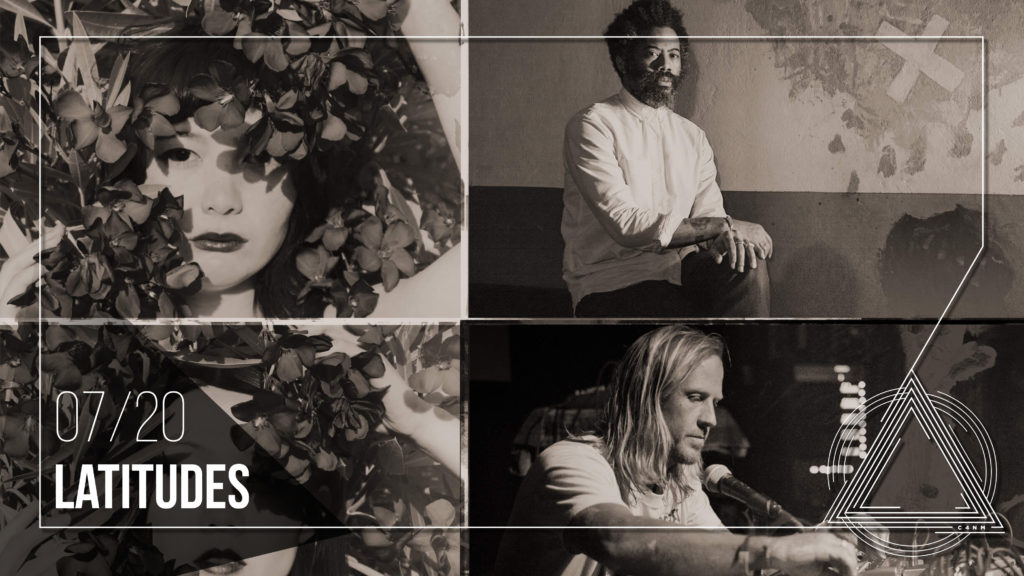 On the next installment of Latitudes, Other Minds teams up with the SF Art Book Fair to present vocalist/composer Robert Aiki Aubrey Lowe, dronesmith Chris Duncan, and the electronics and percussion duo IMA at the San Francisco Center for New Music.
Robert Aiki Aubrey Lowe
Robert Aiki Aubrey Lowe (b. 1975) is an artist and multi-instrumentalist that works with voice in the realm of spontaneous music often under the moniker of Lichens. Most recently, creating patch pieces with modular synthesizer and singing to them has been a focus of live performance and recordings.
Quality of sound through the marriage of synthesis coupled with voice has allowed for a heightened physicality in the way of ecstatic music, both in a live setting and recorded. The sensitivity of analogue modular systems echoes the organic nature of vocal expression which in this case is meant to put forth a trancelike state. To usher in Deep Listening through sound and feeling. Losing one’s self in sound while being acutely self-aware.
By way of a recent meeting and collaboration with artist Patrick Smith, Robert has begun to utilize projections with live performances. The current video piece is called “Clouds” which is a vector driven animation made by Patrick Smith.
Through collaboration Robert has worked with Ben Russell, Ben Rivers, Rose Lazar, Hisham Akira Bharoocha, Tarek Atoui, Ben Vida, Mark Borthwick, Lucky Dragons, Alan Licht, Michael Zerang, Doug Aitken, Patrick Smith, Monica Baptista, Lee Ranaldo, White/Light, Kevin Martin, Chris Johanson, Tyondai Braxton, David Scott Stone, Genesis P-Orridge and Rose Kallal, and many others.
IMA
IMA is Nava Dunkelman x Amma Ateria, marches forth with stark percussion and electronics through noise music of Japanese poetry. Deconstructing and dissolving heavy music through restraint and release, IMA strives for a balance between meticulous detailed precision of instrumentation, filmic transitions between silence and densities, driven to brinks of breakage situated by beautification in between. IMA has been presented in residency at The Stone, New York City (2016), San Francisco Electronic Music Festival, SF (2016), San Francisco Art Institute (2018), and CCRMA, Stanford University (2018). Performed and collaborated with Ikue Mori, Pauchi Sasaki, Fred Frith, John Zorn, Matmos, Zeena Parkins, Erik Friedlander, Brian Chase, and many others.
Chris Duncan
Chris Duncan is an Oakland California-based artist who employs time, repetition and accumulation as a basis for experiments in visual and sound based media. An overriding theme in current works is the use of natural forces, such as the sun, the moon and the ocean as conceptual and compositional prompts for both visual and sonic efforts. He has exhibited and performed nationally and internationally. Outside of his studio practice, Duncan, along with his partner Maria Otero, runs LAND AND SEA- a small press and project space in Oakland. Chris Duncan received his BFA from the California College of Arts and Crafts, his MFA from Stanford University and is represented by Halsey Mckay NY.