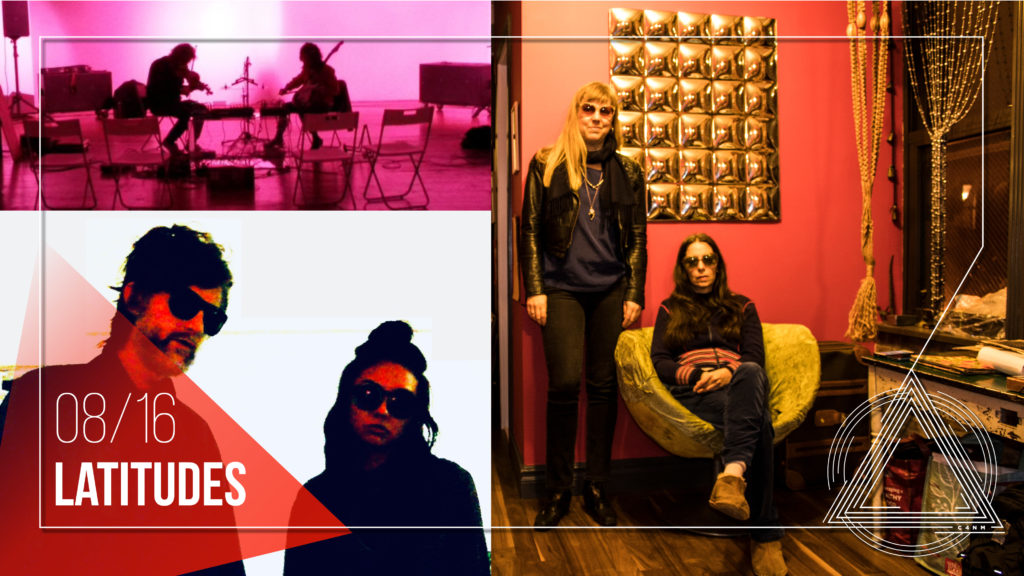 MARCIA BASSETT (guitar) and SAMARA LUBELSKI (violin) first performed as a duo in 2009, improvising musical scores to films by Michael Snow and Hollis Frampton at X-Initiative, Next Years Model series at DIA. Since their initial collaboration, Bassett and Lubelski have continued to draw from their like-minded approach to improvisational music; creating personal interplay with the environmental surroundings to expand on abstraction, chromatic noise, and long form drone. Both Bassett and Lubelski have extensive backgrounds in the East Coast /NYC sub-underground. Bassett has performed in experimental music projects for over twenty years including Un, GHQ, Hototogisu, Double Leopards and her solo project Zaïmph. Lubelski is best known as a solo artist with eight full-length releases, but she has also been involved in various art-music provocations, Hall of Fame, Tower Recordings, as a member of Thurston Moore’s band, and in her associations with the long-standing German collective Metabolismus. The 2012 release of their first LP “Sunday Night, Sunday Afternoon”, on KYE Records, was praised as having “ … incredible expanses and delicately menacing interplay with an increasingly satisfying audaciousness upon each subsequent listen.” — Paul Haney, Tiny Mix Tapes. The latest LP, ‘Live NYC’, Feeding Tube Records (June 2017), “Elegantly shows just how much brain damage you can do using only a guitar and a violin… A tale of twinned and lightly fuzzed tones, twirling and blending…The threads of sound absolutely phosphoresce. It’s an incredible mix of motion, stillness and power.” – Byron Coley.
The duo will have a new LP release on Drawing Room Records Fall 2019.
Kaori Suzuki (US/JP) and John Krausbauer (US) will present music for voices, amplified strings, electronics, and bell percussion. Their work originates from a shared interest in ecstatic and spiritual musics as well as the “avant-garde”. Utilizing sustained tones, alternate tunings, long durations/playing endurances, and stroboscopic lighting, their music explores the parameters and possibilities of psychotropic ‘experiential’ environments rather than the strictly ‘musical.’