Warning: "continue" targeting switch is equivalent to "break". Did you mean to use "continue 2"? in /home/bearjen/apps/cnm2019/wp-content/plugins/types/library/toolset/types/embedded/includes/wpml.php on line 660
 Latitudes: Degradient and Receptacles – Center for New Music
Keeping in mind the health and safety of our community, all in-person events at C4NM are canceled until further notice. However, our staff is still available by email, and all events are now hosted online. From our blog: Resources for Artists During the COVID-19 Outbreak
During these extraordinary times, donations are critically important to the continued survival of arts organizations. 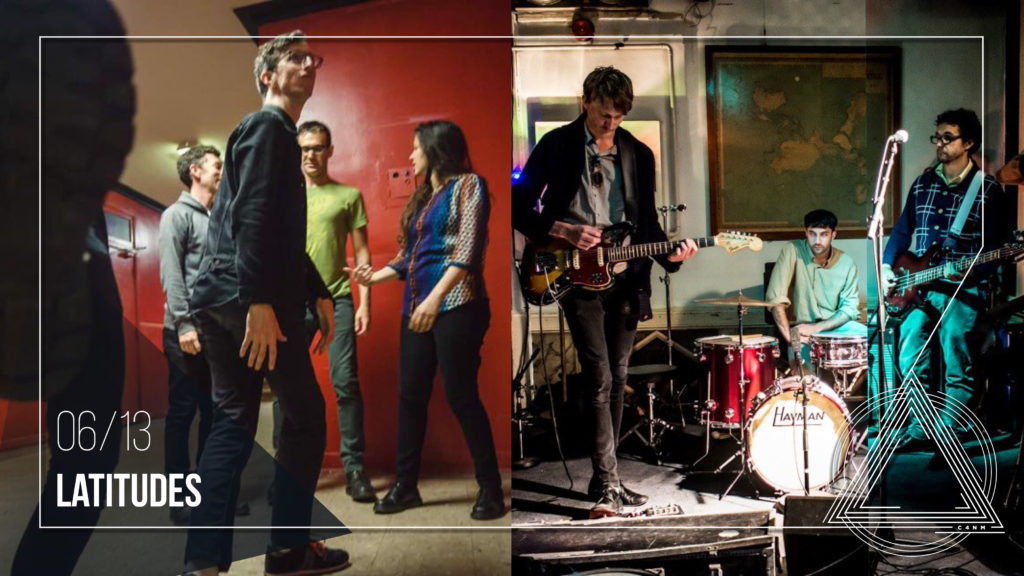 Receptacles
Receptacles make music that disturbs easy categorization. While listeners may hear influences from no-wave, afro-beat, free jazz, funk or punk, Receptacles are not simply a mix of these styles. They have harnessed an essence of spontaneity and in doing so have created something unique and completely their own.
Receptacles willfully instigate and manipulate an elasticity of form, key, tempo and meter. The absurdist, spoken- word lyrics act as the lynchpin in the reckless, hectic, headlong, joyful collision of rhythms and riffs. An anarchistic relationship to group dynamics ensures a strong, original, unified sound, where the sum is more than the parts, and yet the parts are more than the sum.
DEGRADIENT
Oakland-based oboist and composer/performer Kyle Bruckmann’s creative work – extending from a Western classical foundation into gray areas encompassing free jazz, post-punk rock and the noise underground – can be heard on more than 80 recordings from labels including New World, Hat Art, Entr’acte, Not Two, Clean Feed, Another Timbre, 482Music, Innova and Sick Room. He performs regularly as a member of sfSound, the San Francisco Contemporary Music Players, Eco Ensemble, Splinter Reeds, and Quinteto Latino while working as a substitute with most of the Bay Area’s regional orchestras and remaining active within an international community of improvisers and sound artists. From 1996-2003, he was a fixture in Chicago’s experimental music scene; long-term affiliations dating from that era include the electro-acoustic duo EKG, the art-punk monstrosity Lozenge, and the Creative Music quintet Wrack.
DEGRADIENT: After more than a decade of maintaining poly-stylistic sideman duties and long-distance collaborations with former Chicago comrades, Bruckmann finally busts out as bandleader of a Bay Area ensemble. Gleefully colliding elements of skronk, fried analog noise and blackened R.I.O. within a Creative Music framework, DEGRADIENT adds a significant chunk of heavy to his signature gimmicks of jittery polyrhythmic clatter, formal complexity, gallows humor, and all-around sensory overload.
The band’s first major undertaking was Dear Everyone (premiered at the Lab and released by Not Two in 2017), a project taking its oblique inspiration from the recursive, encyclopedic poetry of Bruckmann’s friend Matt Shears. The book of the same name, published in 2016 by Brooklyn Arts Press, was pegged as “pitched dead between thrilling and numbing” with “an absurdist, dark sense of humor.” Bruckmann spent months carrying around a recorder and a fistful of crumpled pages, shoving them into unsuspecting hands, asking friends and family for spontaneous, clumsy readings of fragments. In the end, 99 voices wound up in the cut-up stew.
This performance’s all-new incarnation of the modular work features the in-demand rhythm section (currently driving groups including Jack O’ the Clock and the Fred Frith Trio) of Jason Hoopes and Jordan Glenn, along with live readings by Shears and the volatile vocals of Danistha Rivero (Voicehandler, Las Sucias).