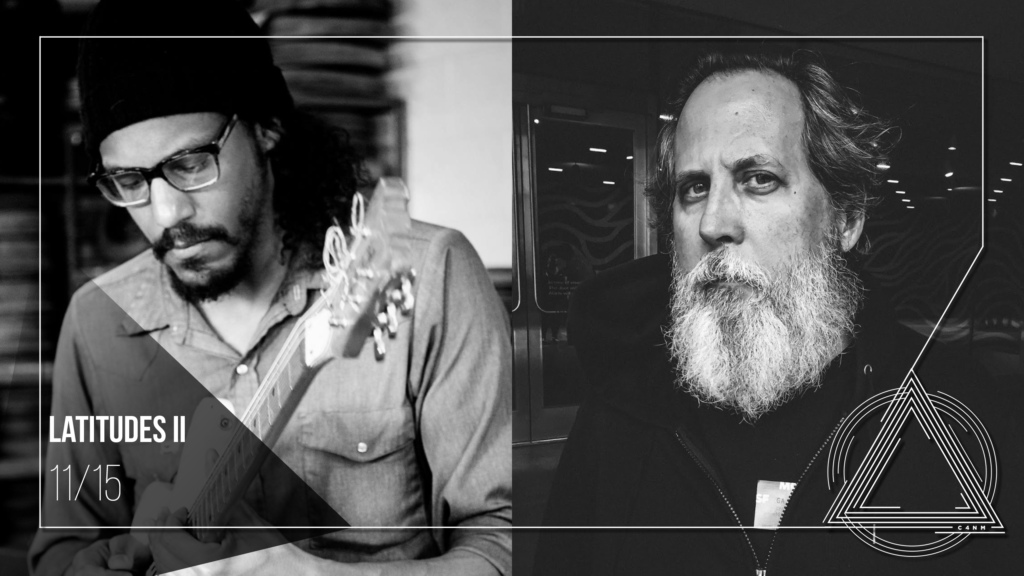 Latitudes: 7:00pm doors, 7:30pm concert
Bill Orcutt
As one of experimental music’s most influential guitarists, Bill Orcutt weaves looping melodic lines and angular attack into a dense, fissured landscape of American primitivism, outsider jazz, and a stripped-down re-envisioning of the possibilities of the guitar. Whether he’s playing his decrepit Kay acoustic or gutted electric Telecaster (both stripped of two of their strings, as has been Orcutt’s custom since 1985), Orcutt’s jagged sound is utterly unique and instantly recognizable, compared with equal frequency to avant-garde composers and rural bluesmen. The New York Times has called him a “powerful musician… a go-for-broke guitar improviser,” and described his sound as “articulated sprays of arpeggiated chords and dissonance.”
Orcutt originally appeared on the underground scene as a co-founder of Harry Pussy, whose explosive music combined ‘70s no wave, the ferocity of ‘80s hardcore, and the acrobatic intricacy of Cecil Taylor. Seemingly single-handedly, and over the course of dozens of releases, Harry Pussy built the prototype for noise-rock in the ‘90s and beyond. Throughout, Orcutt (aided occasionally by a second guitarist) wove incandescent, treble-heavy lines through the maelstrom of Adris Hoyos’ percussion. They toured extensively, performing or traveling with bands like Sonic Youth, Sebadoh, The Dead C, and Guided by Voices, before screeching to a halt in 1997. Writing about a 2008 compilation of their work, Pitchfork described Harry Pussy as “just about the most abrasive band America has ever seen.”
After a hiatus of over a decade, Orcutt reemerged as a solo artist, at first performing solely on acoustic guitar. Drawing influences from Cecil Taylor (again), Dylan’s Basement Tapes, and the recursive voice of Gertrude Stein, Orcutt began exploring the invisible threads linking free improvisation to the forgotten crevices of the American songbook, from blues to minstrelsy.
Upon his return, recognition was immediate. His 2009 album A New Way To Pay Old Debts, originally released on Palilalia and reissued by the acclaimed Viennese electronic music label Editions Mego, was named 3rd best recording of that year by WIRE magazine, who praised its “tense muscularity.” Orcutt went on to work extensively with Editions Mego, issuing a total of four records under their auspices. NPR named Orcutt’s 2011 album How The Thing Sings as the 3rd best avant garde album of the year, commenting that his playing would “make Derek Bailey do a double-take”. His 2013 album of standards, A History of Every One, made NPR’s list of the year’s best new guitar records, and was singled out by the Guardian, who described it as “covers of traditional American songs, deconstructed in lurching flurries of twanging metal.” Most recently, Orcutt’s 2015 album Colonial Donuts was ranked #14 on Rolling Stone’s Best Avant Garde Albums of The Year.
Orcutt maintains an active tour schedule, performing in North & South America, Asia and Europe, and appearing at festivals world-wide, including Hopscotch (Raleigh), Incubate (Tilburg), Le Nouveau Festival du Centre Pompidou (Paris) and Unsound (Krakow). Rolling Stone described his performance at 2014’s Big Ears Festival as “savage.”
In recent years, Orcutt has resumed his paint-peeling electric guitar attack, best represented by his collaborations with drummers (Chris Corsano or Jacob Felix Heule), guitarists (Loren Connors and Sir Richard Bishop), and others (including cellist Okkyung Lee and vocalist Haley Fohr of Circuit des Yeux). His newest work continues the guitarist’s signature interrogation of his instrument, yet signals a new phase of cautiously-employed conventional melody and song structure. With each recording and performance, Bill Orcutt continues to invent a sonic vernacular built around raw and tortured tones, ragged minimalism, and seemingly inexhaustible improvisational stamina.
Zachary James Watkins
Zachary James Watkins studied composition with Janice Giteck, Jarrad Powell, Robin Holcomb and Jovino Santos Neto at Cornish College. In 2006, Zachary received an MFA in Electronic Music and Recording Media from Mills College where he studied with Chris Brown, Fred Frith, Alvin Curran and Pauline Oliveros. Zachary has received commissions from Cornish College of The Arts, The Microscores Project, the Beam Foundation, Somnubutone Radio Series free103point9.org, sfsound and the Seattle Chamber Players. His 2006 composition Suite for String Quartetwas awarded the Paul Merritt Henry Prize for Composition and has subsequently been performed at the Labs 25th Anniversary Celebration, the Labor Sonor Series at Kule in Berlin Germany and in Seattle Wa, as part of the 2nd Annual Town Hall New Music Marathon featuring violist Eyvind Kang. Zachary has performed in numerous festivals across the United States, Mexico and Europe and his band Black Spirituals opened for pionering Drone Metal bandEarth during their 2015 European tour. In 2008, Zachary premiered a new multi-media work entitled Country Western as part of the Meridian Gallery’s Composers in Performance Series that received grants from the The American Music Center and The Foundation for Contemporary Arts. An excerpt of this piece is published on a compilation album entitled “The Harmonic Series” along side Pauline Oliveros, Ellen Fullman, Theresa Wong Charles Curtis and Duane Pitre among others. Zachary designed the sound and composed music for the plays “I have loved Strangers” produced by Just Theatre, which listed “top ten of 2007” in the East Bay Express and the 8th Annual ReOrient Theatre Festival. His sound art work entitled Third Floor::Designed Obsolescence, “spoke as a metaphor for the breakdown of the dream of technology and the myth of our society’s permanence,” review by Susan Noyes Platt in the Summer 05 issue of ARTLIES. Zachary releases music on the labels Sige, Cassauna, Confront (UK), The Tapeworm and Touch (UK). Novembre Magazine (DE), ITCH (ZA), Walrus Press and the New York Miniature Ensemble have published his writings and scores. Zachary has been an artist in resident at the Espy Foundation, Djerassi and the Headlands Center for The Arts.