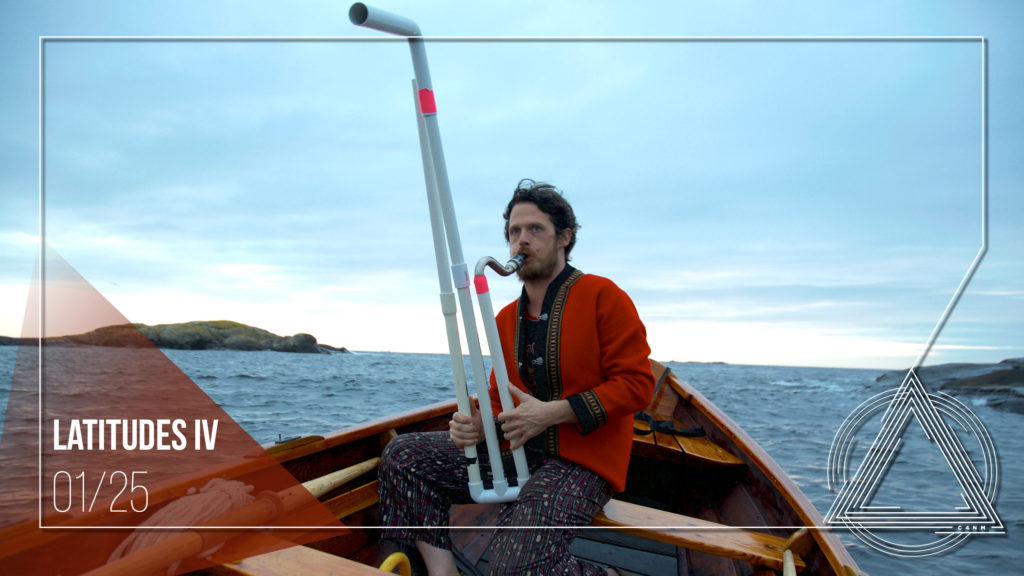 Latitudes is a concert series run by Blaine Todd and Other Minds focusing on a contingent of composers, improvisers, and musicians working in underground forms of contemporary music. It was started in response to the dwindling number of venues in San Francisco presenting artists operating in the liminal space between serious avant-garde music and rock and roll. Precious few venues regularly present music that falls in between these cracks. That in mind, the hope for this series is to help fill a gap that’s glaringly obvious in San Francisco music scene—and do so with the input of the community of music makers and enthusiasts living in the Bay Area.
On the next installment of Latitudes, Arrington de Dionyso conjures utopic zones through ritual trance and the high spirits of electrified rock and roll. The iconoclastic duo DunkelpeK transmits an amalgamated soundworld through percussion and electric guitar, chopping their many influences to bits and reassembling them in a quest for new musical possibilities.

Arrington de Dionyso
An uncompromising voice in contemporary music, Arrington de Dionyso integrates ancient soundmaking techniques with trans-modernist inquiries into the nature of consciousness. His propulsive improvisations utilize voice and reeds (primarily bass clarinets and his invention the Bromiophone) as multiphonic tools in the navigation of liminal spaces between shamanic seance and rock and roll ecstasy.
While deeply rooted in the punk inclination to tear down musical standards in an effort for liberation, Arrington’s music weds no-wave iconoclasm with the spiritual searching of Albert Ayler era free jazz along with more indigenous approaches to improvisation, reaching for an unveiling of primordially potent universalities. His compositions embrace sounds as colors, placing emphasis on the complimentary spectrums- from circular overtones whispered through bamboo flutes to the penetrating deep and guttural howls of amplified throatsinging- all with the lungs of an athlete.
Over the last 25 years he has spearheaded groups such as Old Time Relijun, Malaikat dan Singa, and This Saxophone Kills Fascists. He has also performed alongside many great icons of contemporary music including the Violent Femmes, Master Musicians of Jajouka, Thee Oh Sees, Deerhoof, Senyawa, Keiji Haino and Maher Shalal Hash Baz.
Whether as a band leader, solo performer, or in collaborative settings, Arrington’s music evokes an “Ancient Future”, sometimes shocking and hallucinatory, always aiming to channel Spirit.

DunkelpeK
DunkelpeK is Japanese born percussionist Nava Dunkelman and Canadian American guitarist and pianist Jakob Pek. This iconoclastic duo creates an experimental improvised music that reimagines the possibilities of the duo. Visceral, organic, and spontaneous in nature, DunkelpeK’s sound transfigures and hybridizes many musics, offering listeners a holistic exploration into the very essence of musical experience.