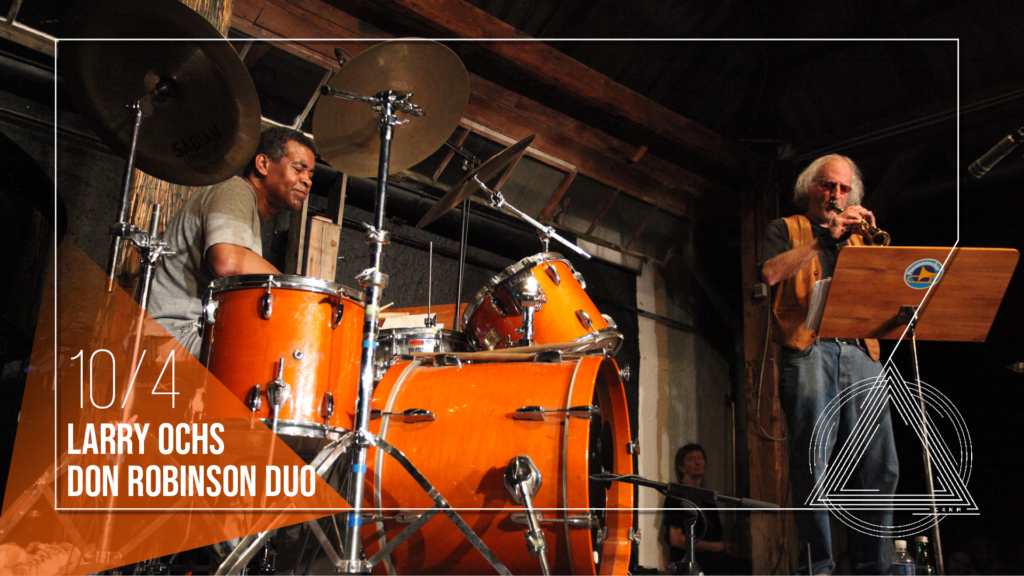 All concerts are streamed via our YouTube channel. The concert link will be emailed after tickets have been purchased.

Celebrating the recent release of their second and definitive duo recording, A Civil Right, Larry Ochs (saxophones) and Don Robinson (drums) hope for a live audience by the end of September, but will be happy to perform for you all no matter the situation. The Duo will perform pieces from the new CD, released on ESP-Disk’ – the legendary free jazz label where Albert Ayler released his own breakthrough free-jazz record in 1964. A lot has changed since 1964, but alot and perhaps “too much” remains virtually the same. So our “free jazz” music, while influenced by many musical discoveries and sociological developments that have become part of the firmament over the past 50+ years, still celebrates and revels in the spirit of sixties free jazz.

Ochs is a founding member of the great ROVA Saxophone Quartet, one of the Bay Area’s avant-garde treasures since 1978. Robinson – “a percussive dervish,” according to Coda – was the drummer of choice for ROVA’s revivification of John Coltrane’s Ascension. The East Bay Express has said of the saxophonist’s sound: “Ochs’ full-bodied tenor is out of the John Coltrane/Albert Ayler ‘free’ tradition: forceful, passionate… talking-in-tongues,” while the Chicago Reader said about the drummer and his relationship with Ochs: “Robinson is neither flashy nor explosive, but his playing has heft and he covers lots of ground – he can maintain a feeling of order while playing meter-less rhythms or transform the pulse of jagged post-bop until it’s almost abstract. He’s a good match for Ochs, and over the decades the two of them have developed a fine-tuned rapport.”

Although Ochs and Robinson have collaborated in various groups for more than 20 years – including in the trio What We Live with bassist Lisle Ellis – their duo is a recent phenomenon, having developed over the past couple of years. Ochs says: “Our playing together has evolved to a really special place, I think. We’re definitely coming out of the tradition of horn-drum duos from John Coltrane & Rashied Ali to Wadada Leo Smith & Billy Higgins, but we’ve found our own space after a long stretch of shows together. Our set will include new, original material, with some high-energy playing and things that are more spatial, as well as some homages to more popular music. In a sparse setting like this, the music hits a listener right away – nothing is obscured, everything is clear.”

Ochs and Robinson first performed together from 1991 to 1998 in The Glenn Spearman Double Trio. From 1994 to 2002, they worked with bassist Lisle Ellis in the trio What We Live, a band that recorded many CDs and added incredible guests for special concerts/recordings including Dave Douglas, Wadada Leo Smith, Nels Cline, John Zorn, Miya Masaoka, Saadet Turkoz and Chris Brown, among others. From 2000 until 2010 Robinson was part of the Larry Ochs Sax & Drumming Core featuring drummer Scott Amendola, as well as Satoko Fujii and Natsuki Tamura from 2007 – 2010. Throughout all this time, Ochs and Robinson jammed and rehearsed in Robinson’s studio, easily done as they live only 15 minutes apart. Thus it seems inevitable that they would – eventually – create a special repertoire for this duo.

Much of Robinson’s work has seen him featured in the stellar rhythm section of Robinson and bassist Lisle Ellis, especially including the band “What We Live” with Larry Ochs on saxophones, a trio that toured in Europe and North America from 1994 – 2002, sometimes with special guests such as Dave Douglas, Wadada Leo Smith or Kazakh vocalist Saadet Turkoz. Recordings with all three of these artists were made in that period as well as three trio recordings.

Larry Ochs, saxophones:
In his forty-plus years in Rova, Larry Ochs has created roughly two dozen compositions for saxophone quartet as well as other pieces for Rova in extended ensembles, many of which are recorded, and some of which were commissioned by Chamber Music America/Doris Duke Foundation and Meet the Composer. He has been acting executive director of Rova:Arts since 1987. In addition Ochs currently composes for and leads The Fictive Five (with Nate Wooley, Harris Eisenstadt, Ken Filiano and Pascal Niggenkemper) and Kihnoua with vocalist Dohee Lee, Scott Amendola and special guests [the Sybil’s Whisper, 2012 CD]). He is performing in collective bands: Jones Jones (with Mark Dresser and Vladimir Tarasov), Every Winter Trio (with Nels Cline and Gerald Cleaver), Spectral (with Darren Johnston and Dave Rempis), Shelton-Ochs Quartet (with Aram Shelton, Kjell Nordeson and Scott Walton) and Maybe Monday (with Miya Masaoka and Fred Frith). www.ochs.cc