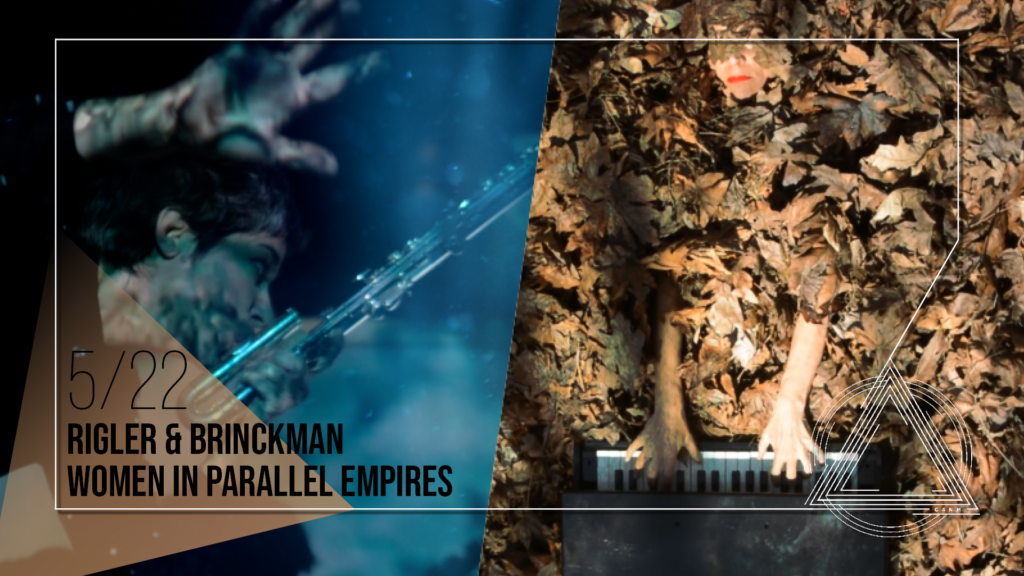 All concerts are streamed via our YouTube channel. Watch the show here.

Flutists Jane Rigler and Tessa Brinckman present the world premiere of their 22-minute acousmatic video, a “space opera”, in posthumous collaboration with Cécile Chaminade’s Sérénade aux étoiles (Serenade to the stars, 1911). Women in Parallel Empires explores how we might reclaim flute compositions by women composers dismissed from the Western canon, by re-assembling them within contemporary contexts, and addressing (and/or subverting) the concept of Empire, genius, and extraction in Western “art” music. A short pre-concert discussion between Jane and Tessa about their collaboration, starts at 4:00 PM (Pacific time).

The life and career of Cécile Chaminade (1857-1944) fall very closely into what the Empire’s creators call a cross-century study in parallel: Chaminade living between the 19th-20th century divide, just as the Rigler and Brinckman reside within the 20th-21st century’s unfolding of musical styles, technologies and genres. Chaminade composed over 400 works, many of which were hailed as elegant (while others called it “unsophisticated”) and hypocritical attitudes towards her music continue today.

Étoiles, composed by Chaminade for flute and piano, is prescient, vis-a-vis serenading, rather than mining and colonizing, the stars. Serenades are a tradition of gentle musical greetings, often performed outdoors, and acknowledge and honor the complex Other. Empires reassembles a piece that has effectively been dismissed from the “canon” as merely salon entertainment, into a digital installation that respects Étoiles’ prescient insights, ecstasies and legacy.

Flutist/composer Jane Rigler sees this project as being propelled by her work in Ireland as a Fulbright Scholar in 2019-20, where she explored the complexities of the Gaeilge language and ancient Sean-nós song forms, through sound, voice, and movement, as well as other non-human codes and syntax. Her trajectory as a flutist/composer and embodied sound researcher has investigated acoustic and electronic phonological musical sounds, through Deep Listening, that emerge from unwanted or accidental natural sounds from instruments and resonating objects.

Under the aegis of a University of Colorado, Colorado Springs (UCCS) faculty women’s grant, awarded to Jane, fellow flutist/ composer Tessa Brinckman was the “obvious and exciting choice for collaboration in this project.” Tessa herself writes that, “my life’s work as a flutist/creatrix engages with politics, poetics, science and ancient knowledge, within the complexity of my colonial New Zealand and South African heritage, and current life in the United States. I cannot privilege the new over the old, the old over the new. I have a synaesthetic concept of sound, the experience that flute playing is literally articulating words, a reverence for the innate meter in all things, and a sure knowledge that relationship overrules acquisition and extraction.”

Clay Bowen is a Colorado Springs based filmmaker, currently studying at the University of Colorado Colorado Springs. He is in demand as a versatile collaborator, creating feature films, music videos, and commercials within a wide range of artistic expression.