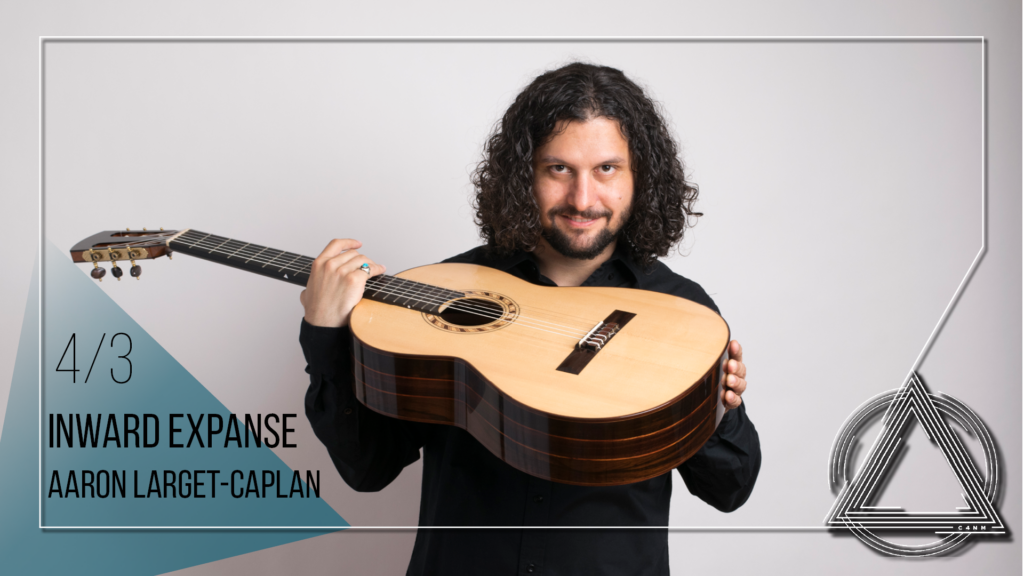 Guitarist Aaron Larget-Caplan returns to C4NM in a solo concert titled ‘Inward Expanse’, which explores one’s position in daily life from a mystical, scientific, and cerebral perspectives with music for guitar and electronics, acoustic solos of night.
Steps and Leaps by Tom Flaherty celebrates the success of humankind marking the anniversary of the Moon Landing, while Carousel by Lainie Fefferman was written at the start of the Covid pandemic and exemplifies the confusion and worry of daily life and what’s coming. Lou Bunk’s Being and Becoming is an expanse of a note…a person…a cup of coffee.
The sonic world of the lullaby is touched upon with acoustic compositions written for Aaron’s critically acclaimed commissioning endeavor the ‘New Lullaby Project’, with multiple California premieres and New Lullaby Project world premiere #69 by Brazilian composer Antonio Celso Ribeiro. Other composers include Brian Schrober (NYC), Laurie Spiegel (NYC), Anthony Green (RI/UK), Štěpán Rak (Czech Republic), Ken Ueno (UC Berkeley). Some lullabies look at the duty of the lullaby, others a moment of what the two worlds of wake vs. sleep represent, and others how our minds slip between and adjust to our dreams as we fall asleep.
Bonding the new and old, Aaron includes one of his groundbreaking John Cage arrangements. Written in 1948, ‘Dream’ is a lyrical work written for choreographer Merce Cunningham. Aaron’s new arrangement was made in 2015 and published in 2017 by Edition Peters and recorded on ‘John. Cage. Guitar.’ issued by Stone Records (UK).