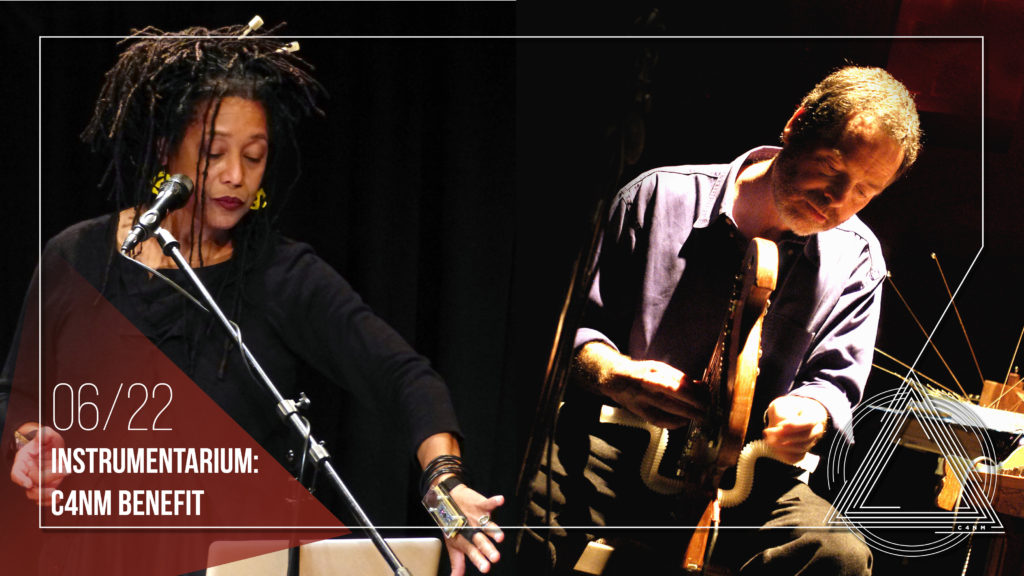 5:30pm, reception hosted by the Board of Directors
-with new music from curators Bart Hopkin and David Samas
7pm, concert featuring Pamela Z and Donald Swearingen
-special guests Krys Bobrowski, Brenda Hutchinson, Karen Stackpole Trio
.
Join us for a celebration of the Bay Area invented instrument community and C4NM’s Window Gallery. 5:30-7pm, our Board of Directors will host a reception with new music by curators Bart Hopkin and David Samas. From 7-9pm Pamela Z and Donald Swearingen will perform alongside special guests Krys Bobrowski, Brenda Hutchinson, and the Karen Stackpole Trio. Proceeds from this special event will support C4NM’s Window Gallery, allowing us to continue presenting the most imaginative instrument inventors and artists crossing the boundaries between visual art, acoustic craftsmanship, and music.
.
Pamela Z is a composer/performer and media artist who makes solo works combining a wide range of vocal techniques with electronic processing, samples, gesture activated MIDI controllers, and video. She has toured extensively throughout the US, Europe, and Japan. Her work has been presented at venues and exhibitions including Bang on a Can (NY), the Japan Interlink Festival, Other Minds (SF), the Venice Biennale, and the Dakar Biennale. She’s created installations and has composed scores for dance, film, and chamber ensembles (including Kronos Quartet). Her awards include the Rome Prize, a Guggenheim Fellowship, the Doris Duke Artist Impact Award, the Robert Rauschenberg Foundation residency, the Herb Alpert Award, and an Ars Electronica honorable mention, and the NEA/Japan-US Fellowship.
.
Donald Swearingen is an Oakland, California-based composer, performer, multimedia artist, and designer of interactive performance systems and installations. Classically trained, but with an ear to the radio, he gravitated to popular music in his teens and early twenties, working for 10 years in the Memphis music industry, both as a traveling performer, and recording artist at such legendary studios as Stax and Hi. Eventually, his work with studio electronics and synthesizers reoriented his focus, and he turned to the academic world where he pursued undergraduate studies in computer music, mathematics, electronics and physics, followed by advanced degrees in mathematics and computer science.
For the past 20 years, his work has revolved around the use of movement and gesture as the source of media control in an expanded, computer-assisted performance environment.
.
Krystyna Bobrowski is a sound artist, composer and musician. In addition to French horn she plays acoustic and electronic instruments of her own design. Her collection of original instruments includes bull kelp horns, prepared amplified rocking chairs, leaf speakers, Gliss Glass and the Sliding Speaker Instrument.
.
Through her work with large-scale experiments in socially based improvisations and interactions, Brenda Hutchinson has developed a body of work based on a perspective about interacting with the public and non-artists through personal, reciprocal engagement with listening and sounding. She has also been making sounds and singing into one end of a 9 1/2 foot Long Tube since 1990 and has developed a more bionic, electronically enhanced version of the Long Tube that she uses for both solo performance and to improvise with other musicians.
.
Karen Stackpole is a drummer/percussionist who specializes in gongs and metals in particular. She has a penchant for subtle sounds and experimental music, playing both solo and in collaboration with others. Over the years she has managed to amass a wide collection of traditional and exotic percussion instruments as well as an arsenal of found objects that she uses to create some truly unique soundscapes.
 .
Bart Hopkin is maker of acoustic musical instruments and a student of musical instruments worldwide. From 1985 to 1999, he edited the quarterly journal Experimental Musical Instruments. The journal served as an essential resource and clearing house in an otherwise scattered but lively and growing field. During those year and in the years since, Bart has written over a dozen books on instruments and their construction. In recent years, Bart has focused more than ever on the making of one-of-a-kind musical instruments, assembling a collection of well over a hundred unique types. In his work as an instrument maker, Bart’s primary interest has been in exploring diverse acoustic systems. His Savart’s Wheel, a tuned, motor-driven scraper with a range of over two chromatic octaves, is one of the most irritating musical instruments ever devised.
.
GRAMMY wining vocalist David Samas is a polymath composer, conceptual artist, instrument inventor, curator, poet, painter, shaman and permacultualist native to San Francisco. The queer son of mixed immigrants, David holds a BFA in Conceptual Art from the SF Art Institute, and is a certified hypnotist, sound healer, wilderness first responder and Reiki master. He is director of Pet the Tiger, a Bay Area instrument inventors collective and curates the Window Gallery for invented Instruments at the Center for New Music SF. He is the founder and primary composer for of the Harmonic Series Gamelan.