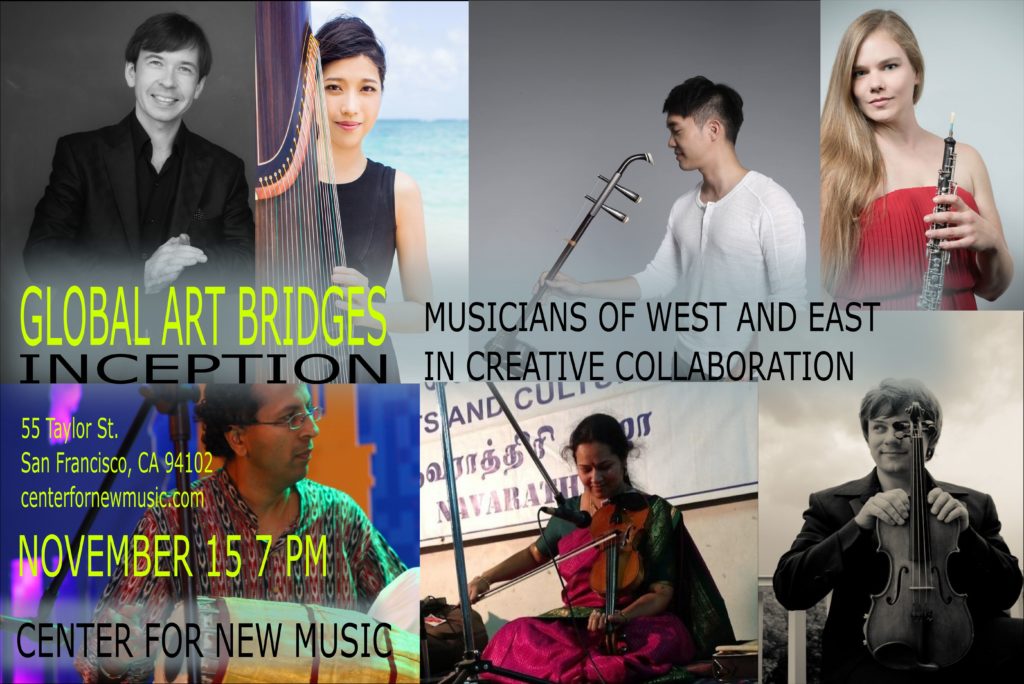 Global Art Bridges: Inception
Global Art Bridges is a collaborative project uniting various musical and artistic traditions of the world in concerts of original music. Started by Leo Iogansen and Sasha Burdin in the Spring of 2019, the project Global Art Bridges was born in a series of discussions of a common vision: building bridges between various cultures by bringing their rich musical traditions onto a shared stage. The project combines instruments from the West – piano, violin, oboe and from the East: Carnatic violin and mridangam (Southern India), erhu and guzheng (China). In this project, the musicians incorporate the elements unique to the cultures and musical traditions of their instruments while adhering to the structures and notation of western classical music. Improvisation is central to many of the world’s musical traditions, in particular – to some of the traditions featured in the project, such as Carnatic improvisation, Chinese traditional music, and jazz.
The musicians are excited to present their first series of concerts, titled Inception. The concerts will feature the world premieres and arrangements of works written specifically for this ensemble by the founders of the project, Leo Iogansen and Sasha Burdin, as well compositions created by other members of the ensemble.
The use of improvisation is reflected in Iogansen’s work Seeping Waters, where the academically refined structure incorporates sections of Indian classical improvisation in Carnatic style and blending it with western instruments, while alluding to the sounds of traditional Chinese music. The work is inspired by the imagery of ices melting in the Himalayan Mountains. The geography of this imagery contributes to the overall meaning of the work: as the ices melt, they turn into creaks which seep through the rocks and merge in the valleys of India. The work strives to combine traditional South-Indian music with western styles by use of ragas and controlled improvisation. Indian musical traditions build tunes on ragas – musical scales, which constructed with intricate rules of choosing pitches, which give these scales distinctive moods, with some ragas being more common than others. The raga chosen for this piece is called “todi”.
The Southern Indian tradition of free improvisation is called alapana. Srinath Bala and Sandhya Srinath will perform a work which engages several different ragas in a dynamic and captivating alapana flow.
Cycles is a composition by Burdin for piano and double bass, it uses the elements of minimalism, jazz, and funk. Born out of Improvisational flow, the work is fully notated.
The duo piece Homage a Medtner for violin and piano is based on Nikolai Medtner’s theme from Tale op.20 No.1 In Burdin’s work intensely melancholic character of the original Tale transforms into an intriguing virtuosic composition with grotesque elements.
Memory was composed by Chia Jui Chiang in 2011. It describes the nostalgic feeling about composer’s hometown when he was living in America. The first section contains of a more Taiwanese local musical style with some imitation of percussion sound from the dulcimer. In the second part, it fused some contemporary technique with atonal music. And the final section backs to the original slow with the sensation of melancholy at the end. In the concert if will be performed as a duo with the piano.
The solo guzheng work Dance-like sketches (created by Jay Lai) uses traditional and modern techniques of composition to create a hypnotic and powerful musical poem, catching the audience’s attention from the very first note. Iogansen’s Intermezzo is a part of a larger work for guzheng and orchestra, Traces of Wind. It features meditative, atmospheric sounds, evocative of the sounds one hears at night near a pond or a lake. The piece begins with a chorale of high-pitched harmonics, which are interrupted with running passages and solos of guzheng and other instruments.
Wings of Wind – is inspired by the author’s enchantment with exotic butterflies, specifically those that come from Asia’s tropics. The rhythmic pattern of the main theme in the violin is mimicking the motions of a butterfly’s wings.
Butterflies- is inspired by the author’s enchantment with exotic butterflies, specifically those that come from Asia’s tropics. The rhythmic pattern of the main theme in the violin is mimicking the motions of a butterfly’s wings. As the piece develops, the interplay between violin and guzheng parts reflect the flapping of the wings of butterflies caught in the streams of air on a windy day.

Jasmine Song – traditional, arranged by Leo Iogansen. This is one of the more well know Chinese folk songs both in China and in the West. It is famously used in Puccini’s Turandot – his last opera. The lyrics of the song praise and express admiration for the flower of jasmine as a subtle metaphor for beauty and romantic love of youth.
Calling is a full ensemble piece based in three movement based on the pitches of Carnatic Indian raga Bo Shambo. The goal in creating this work was to incorporate musical languages as well as tuning systems of India, China, and Western music into a coherent and balanced composition, where diverse instruments blend in harmony, while maintaining their unique voices. The three movements represent the three elements of nature – air, fire, and water. All movements are connected and proceed without stopping, evoking the transformational quality of the elements. The composition is based on the two main themes – the opening theme, performed on Carnatic violin, and the theme titled The Resolve.
Burning Dance, – a captivating melody in 14/8 meter where all the instruments are playing in unison, representing the power and resolve of the fire element.