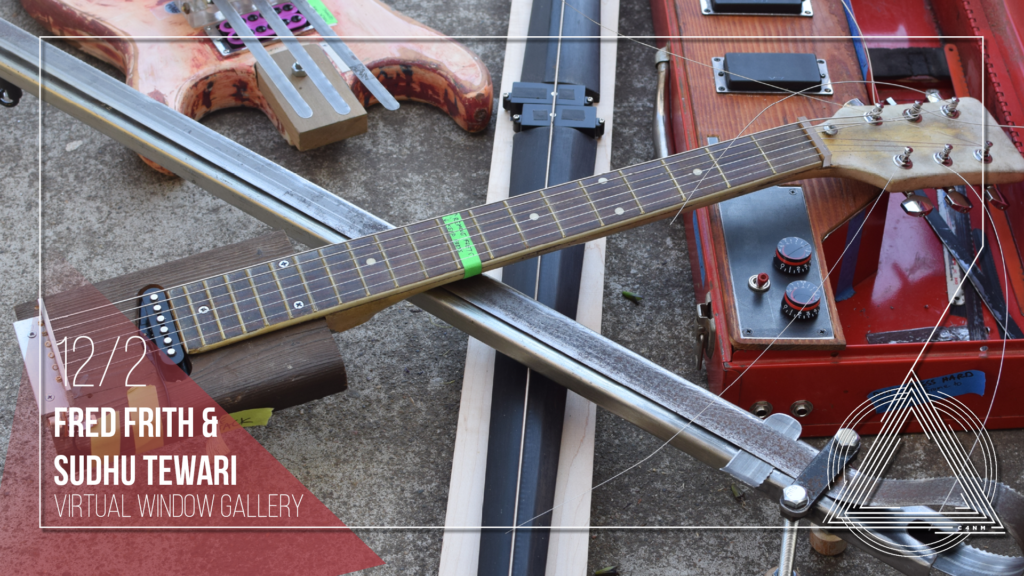 Join Fred Frith and Sudhu Tewari for a demonstration and discussion with Bart Hopkin online on YouTube Live. Simply log on at 7:30pm on 12/2. Watch the program and engage with the artists live in the chat!

In preparing this exhibition we were continuously confronted with basic questions: Why build a new instrument? What is it supposed to do? How will it be played and in what context? To what extent will it require appropriate techniques, and will the result be consistent? Is that actually what we want?

Sudhu and I have been playing in our duo, Normal, for many years now, a “group” that plays manually & electronically manipulated instruments that we build ourselves. Not really instruments in the sense of beautifully crafted art objects so much as crude de-constructions patched together using the simplest of means, and requiring only minimal exertion to produce sound. My “planks of wood with strings” were almost all built in the early 1980s, when for a period of a couple of years I abandoned the guitar as my primary vehicle for improvising. I had come to the conclusion that the guitar was not really relevant—as a guitar—to the way I was playing, and was trying to reduce the idea of an “instrument” to its most basic and simple form. I guess you could say that Sudhu and I share a kind of “junk” aesthetic. We deeply admire the stunning craftsmanship of such inventors as Hans Reichel and Oliver DiCicco, but are also aware of the ways in which that very craftsmanship also reduces the gestural vocabulary to one that is more or less dictated by the perfection of the result. If our musical philosophy runs along the lines of “what will happen if I do this, now” then our constructions need to reflect that openness, and desire—not to say delight—for surprise!

Sudhu is a tinkerer of genius. He plunders garages and junkshops and scours the streets for the sources of his sound world. The smallest spring may turn into a potential orchestra, the bluntest needle into a sharp response. But the thing is, what is really going on is intense listening. As he says: “From my perspective, this project is about making instruments that serve the purpose of making the kinds of music that we make together, or that we might want to make, along with a healthy dash of simply trying things to see if they might result in something amazing that we would never have thought to do.”

The results of these couple of months of reflection and hard work suggest ideas about composition as much as they do about improvisation. The next step will be to take those ideas and run with them wherever they might take us…

A pioneer of the extended electric guitar, Fred Frith has been active across a broad spectrum of sound exploration for more than 50 years. Described by Guitar Player as “a musician who makes miniatures of the world around him using scraps torn from corners of the map”, Fred has been deeply involved in the art and craft of improvisation since the late 1960s while maintaining a strong connection with his roots in rock and folk music through bands like Henry Cow, Art Bears, Massacre, Skeleton Crew, Cosa Brava and The Fred Frith Trio. His compositions have been performed by groups ranging from the Ensemble Modern, and Arditti Quartet to Ground Zero and Sleepytime Gorilla Museum. Film music credits include the acclaimed documentaries Rivers and Tides and Leaning into the Wind by Thomas Riedelsheimer, The Tango Lesson and The Party by Sally Potter, Werner Penzel’s Zen for Nothing, and the award-winning (and Oscar-nominated) Last Day of Freedom, by Nomi Talisman and Dee Hibbert-Jones. He has also created an extensive catalog of music for dance, notably for Amanda Miller’s Pretty Ugly Dance Company in Germany. Fred taught for twenty years in the Music Department at Mills College in Oakland, California, and co-directed the improvisation Master’s Degree program at the Musik Akademie in Basel, Switzerland. He was also one of the curriculum designers for the new School of Music and Sound Art at the Universidad Austral in Valdivia, Chile, where he is a visiting professor.

Sudhu Tewari has been described as “bricoleur”, “junkyard maven”, and “audio-gadgeteer”. He invents, designs and builds from whatever materials are to hand—musical instruments, kinetic and sound sculpture, interactive installations, audio electronics, and wearable sound art. Along with Fred Frith, Sudhu is one half of the home-made instrument duo Normal, and has performed in this and other configurations in Europe, Japan and the USA. His visual and interactive art has been exhibited at Swarm Gallery, 21 Grand, ProArts, and FLOAT Gallery in Oakland; the Center for New Music, the Exploratorium, and the Museum of Modern Art in San Francisco; and at Montalvo Arts Center, UC Berkeley, the Tech Museum in San Jose, the Oakland Museum of California, PROGR and the Laboratoire Village Nomade in Switzerland. He has been teaching electronics and sound art to children and adults since 2009 and continues to build and perform with self-governing musical systems and self-built musical instruments. His relentless curiosity and delight in unlikely solutions to intractable problems are manifest in all of his work. Sudhu holds an MFA in Electronic Music from Mills College, and a PhD in Cultural Musicology from UC Santa Cruz. He is currently Workshop Technician in the instrument building program at Mills College and teaches art, technology, and design at California College of the Arts, the University of San Francisco, and Expression College in Emeryville.