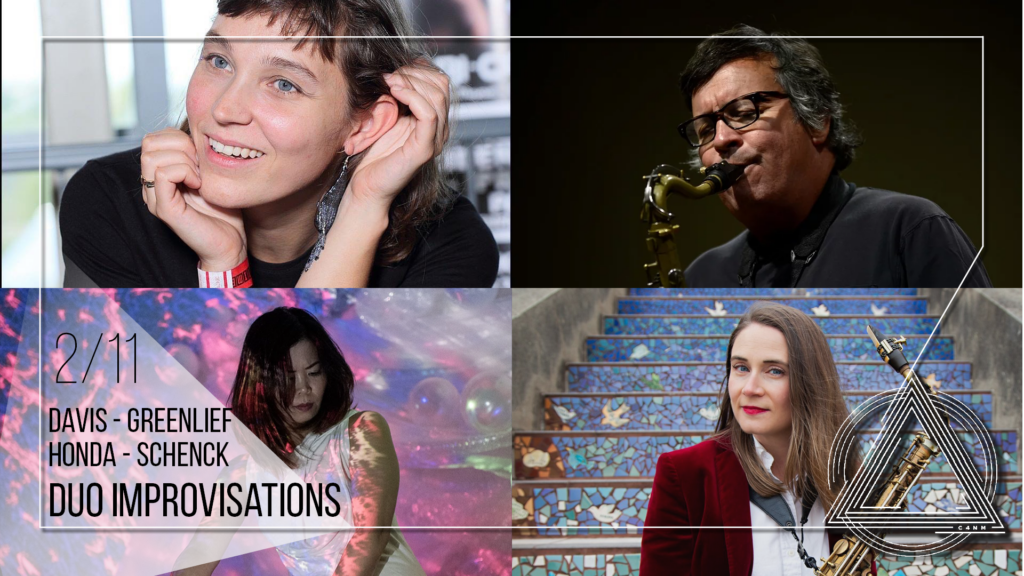 Duo improvisation is often described as a dialogue – a conversation between musicians who can enact interplay in the moment that evokes intelligence, humor, quick responses and deep feeling, where listening is as an important as what is stated. For this concert, Evelyn Davis and Phillip Greenlief switch it up with Motoko Honda and Beth Schenck – each of these duos have a history of working with composition and improvisation, but on this occasion the pairings switch in the spirit of exploration and joy.

Detroit native and general wanderer Evelyn Davis is an inside/prepared/new music pianist, improvisor, pipe organist, composer, vocalist, synthesist, teacher, songstress, and maker of /participator in oddly shaped musics with an occasional side of performance art. She improvises and has recorded with Phillip Greenlief, Fred Frith, and Michael Zerang. She is active as a touring musician in the US and abroad, and has appeared at several prog festivals in Europe, including Rock in Opposition festival in Carmeaux, France, and Different Sounds Festival in Lublin, Poland.

Since his emergence on the west coast in the late 1970s, saxophonist/composer Phillip Greenlief has achieved international acclaim for his recordings and performances with musicians and composers in the post-jazz continuum as well as new music innovators and virtuosic improvisers. He has performed with Wadada Leo Smith, Meredith Monk, Rashaun Mitchell and They Might Be Giants. Albums include LANTSKAP LOGIC with Fred Frith and Evelyn Davis, THAT OVERT DESIRE OF OBJECT with Joelle Leandre, ALL AT ONCE with FPR (Frank Gratkowski and Jon Raskin), and OH THAT MONSTER with LA punk pioneers Thelonious Monster.

Japanese-born pianist/composer/media artist Motoko Honda has created a distinctive sound through her holistic approach to music, her collaborative sensibility to multiple art forms and inspired use of innovative technologies. Portrayed as a “Keyboard Alchemist”(Chris Barton, L.A.Times) and the “Embodiment of a Muse” (Greg Burk, metaljazz.com), Honda has fascinated critics and audiences alike with her genre-defying innovative approach to piano playing and composing.

Beth Schenck is a San Francisco based saxophonist, composer and educator. Since moving to the Bay Area from Brooklyn in 2013, Beth has become an active performer in the West Coast jazz, improvised and chamber music scenes. As a composer, Beth has written music for the Sunset Jazz Festival (Nagasaki, Japan), Women’s Work Festival (New York City), Outsound Summit (SF), Silla Festival (Korea) and schools in New York City and Los Angeles. Beth’s music has been described by critics as “frank and beautiful” (Greg Burk), “reliably enthralling” and “transporting” (Andrew Gilbert).