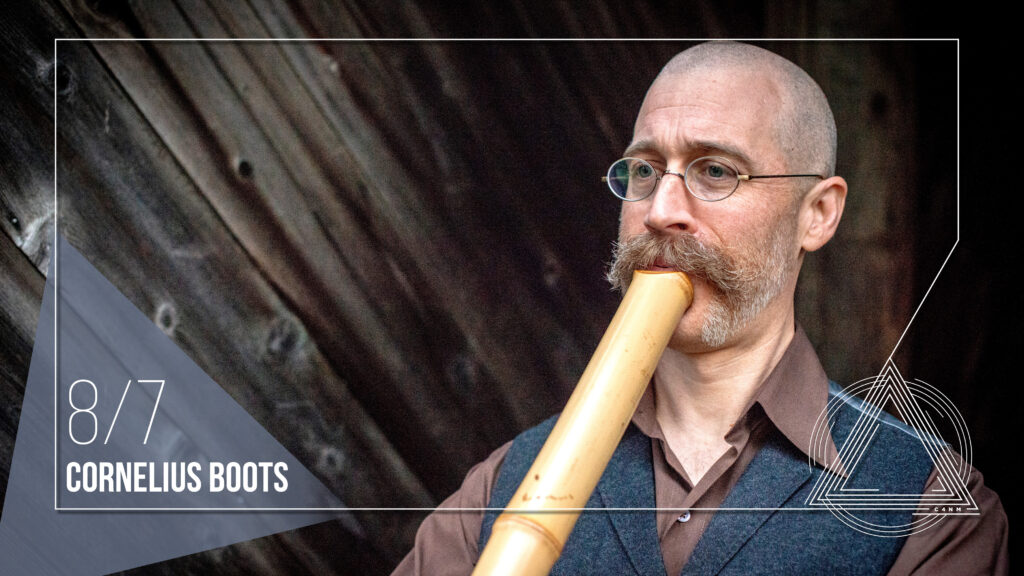 This solo, earthy concert presentation will feature a “greatest hits” and a thorough introduction to the new repertoire called Bamboo Gospel. Ranging from virtuosic and energetic to meditative and subtle, this music emerges from the breath-laboratory of local woodwind iconoclast and composer-performer Cornelius Boots. An ex-bass clarinet monster, Boots has been focusing his fearlessly creative evolutionary vision on the holy ghost of woodwinds, shakuhachi — the ancient flute of Japanese Zen. Gravitating as usual to the lower members of the instrument family, the Taimu (wide-bore, baritone, Barry White of the shakuhachi world) became the obvious partner in merging the nature-steeped world of Zen monastic music with the roots of Boots’ previous career in advanced jazz performance/composition: old gospel and rural blues.

“far left of center–beyond category” Ari Herstand, author of How to Make It in the New Music Business

In 2018, he was a finalist in the World Shakuhachi Competition, a featured performer for Sony PlayStation’s E3 press conference (LA) and a featured performer/lecturer at both the World Bamboo Congress (Xalapa, Mexico) and the World Shakuhachi Festival (London). In 2019, Boots started up the Heavy Roots Shakuhachi Ensemble, the world’s first bass shakuhachi group, debuting at SF Music Day. The Heavy Roots received a 2020 Musical Grant Program Award from InterMusic SF for their (in-process) woodwind chamber saga Wood Prophecy. As a series curator at the Center for New Music in San Francisco, Boots will be collaborating with other deep woodwind soloists and innovators in 2020 and 2021.

Boots’ experience as a jazz saxophonist, orchestral clarinetist, funk bandleader and founder/composer of the renowned bass clarinet quartet Edmund Welles have made him a sought after composer and collaborator for bold woodwind soloists, rock and chamber groups as he continues to create new repertoire for his instruments. Cornelius is a Vandoren and Mujitsu Shakuhachi artist.