Warning: "continue" targeting switch is equivalent to "break". Did you mean to use "continue 2"? in /home/bearjen/apps/cnm2019/wp-content/plugins/types/library/toolset/types/embedded/includes/wpml.php on line 660
 Cornelius Boots: 10 Years of Mukyoku: New Bass Shakuhachi Music – Center for New Music
Keeping in mind the health and safety of our community, all in-person events at C4NM are canceled until further notice. However, our staff is still available by email, and all events are now hosted online. From our blog: Resources for Artists During the COVID-19 Outbreak
During these extraordinary times, donations are critically important to the continued survival of arts organizations. 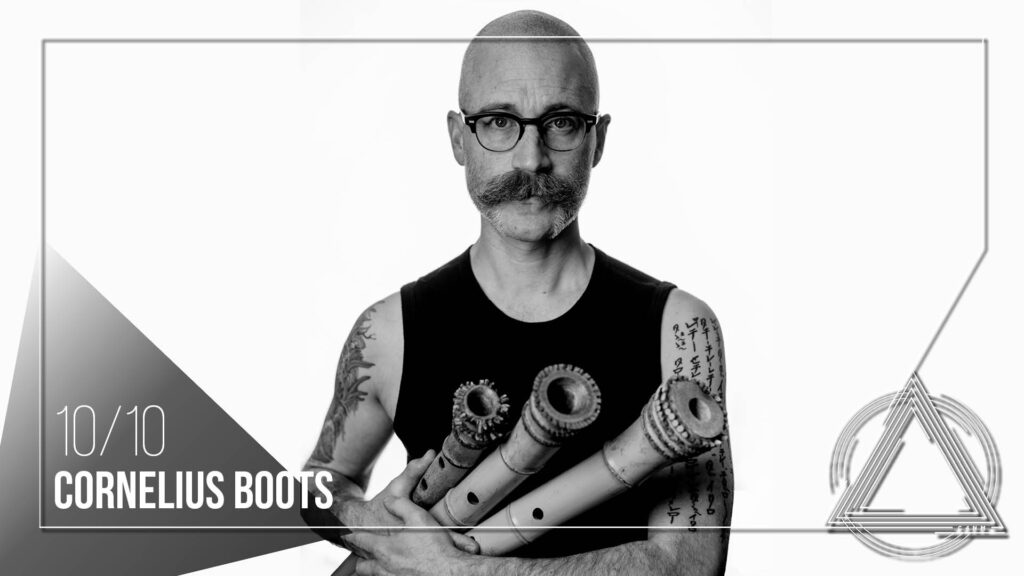 This concert is free! Donations suggested $20-40, to be split between Boots and C4NM.

In October 2010, Cornelius completed and self-published a full solo repertoire for one of the world’s rarest and most difficult musical instruments: Taimu shakuhachi. This is a wide-bore bass variant of the vertical bamboo flute of ancient Zen Buddhism, shakuhachi 尺八 – the Barry White of the long bamboo flute, if you will. The primary repertoire for shakuhachi is called honkyoku 本曲 (meaning “inner music”) and is a truly unique solo musical practice for breath and Nature meditation, developed for over 1000 years in Japan. “Taimu” means “big nothing” and the name “mukyoku” 無曲 therefore means “songs of nothing,”and is a nod to the primary historic shakuhachi practitioners, komuso monks, “priests of nothingness,” who were also sometimes samurai spies.

When Ken LaCosse of San Francisco began experimenting with making shakuhachi from wider, longer pieces of bamboo, it opened up new textural, timbral and earthier vistas for master-in-training Cornelius Boots, a fixture of the Bay Area creative music scene since 2003. Understanding the difficulties of this beastly flute — being able to hold it, cover the holes, or make a sound at all on an empty tube with no reed, mouthpiece, or moving parts — while also leaning into its musically expressive possibilities, Boots began to pen a few tunes to help himself and future aspirants on this rooty, shadowy woodwind path. As the compositions took shape, fingering charts for special notes, a series of exercises leading up to the pieces, example recordings, 20 pages of philosophy and guidance and a sequence of three difficulty levels (9 songs each) also emerged.

The final set – 70 pages of kinko notation scores, exercises, charts, text, 3 CDs, instructional videos — was published in Levels on LaCosse’s Mujitsu Shakuhachi website and together they presented a workshop/concert on October 9, 2010 in San Francisco. Since then, these materials have proven themselves as a core method of connecting deeply to these flutes, for players of all levels, and for preparing them for the traditional honkyoku repertoire which remains at the center of every Zen shakuhachi practitioner’s world. A handful of these songs also served as the basis for Boots’ solo shakuhachi concert performances — which began in earnest immediately on the heels of the Mukyoku release — and opened the portal for his continued composing and transcribing for shakuhachi and Taimu. As of October 2020, this includes over 75 compositions and arrangements (not all notated yet!) that have been released over 5 albums, including the “Best of Mukyoku” album, Mountain Hermit’s Secret Wisdom, and Shakuhachi Unleashed: Volumes I, II and III.

Tonight’s concert will feature 10 seldom performed Mukyoku pieces on a variety of big beastly bamboo shakuhachi flutes. Here’s to ( at least) another 10 years of tones!

Thank you for listening to and supporting creative new music, we want to stay connected with you and look forward to returning to in-person concerts at some later date in the year 2021. Until then, maximum adaptability, fortitude and imagination: Onward!