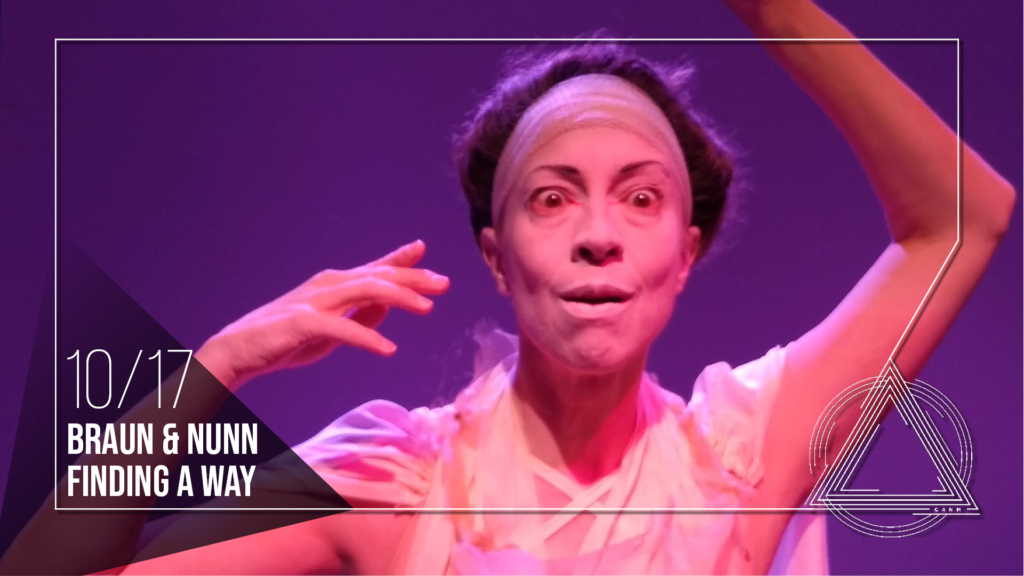 This event is presented in person at the Center for New Music. Masks are required for all in attendance. Attendees are required to be fully vaccinated. Audience capacity is reduced, so purchase your tickets early.

Christina Braun performs dances to the music of Tom Nunn.  Underlying the dances and music is the idea of finding a way through life struggles: finding a way toward solution, resolution, reconciliation, and self-actualization.

Finding a Way through Art – Skatchart

Finding a Way through Catastrophe – Chaseplate

Finding a Way through Chaos – Skatchwheel

Finding a Way through Harmony – Crustacean

Finding a Way through Community – Skatchplate

Christina and Tom have performed together in Bay Area festivals for a decade.  This is their fourth evening length work.

Christina Braun is a lifelong dancer and considers art making a revolutionary path.  Tom is Christina’s long term improvisational art partner.  Her choreographic work with director, David Samas, has been presented by the LAB, the Oakland Museum of California and the Asian Art Museum.  As SF Butoh LAB, Christina has produced Butoh dance symposia, performances, and workshops.  SF Butoh LAB’s mission is to strengthen a culture of peace through dance and collaborative art practices.

Tom Nunn has designed, built and performed with experimental musical instruments since 1975, always with a focus on recycled/re-purposed materials, to create a unique voice in improvised music.  His years of work with Christina Braun has brought a rich visual and dramatic focus to his music.  He has participated in several festivals such as the High Zero Festival in Baltimore, AK07 in New Zealand and Sound Symposium in Newfoundland.

Crustacean:  A 32-1/4” diameter sheet of stainless steel onto one side of which are attached various lengths, diameters and shapes of bronze brazing rod.  The plate rests on three inflated 11” toy balloons in cardboard paint buckets.  A special stand accommodating (and stabilizing) the three buckets position the Crustacean at a waist level height.  The rods are bowed with small violin bows to produce a variety of tones (sounding like voices or brass or strings, depending on which harmonics of the rod are excited).  The rods are arranged on the plate to maximize bowing access using curved trajectories (like the curved top of a violin bridge that allows access to one string at a time).  A mic is positioned beneath for further amplification.

Chaseplate:  A roughly square stainless steel plate with embossed surface, again supported by inflated balloons, and a central group of bronze rods, as found in the Crustacean.  The rods are bowed and struck, but the large area around the rods is actuated by cardboard tubes of different diameter, length, thickness and density.  Each tube has a “nose” that is pushed along the surface of the stainless steel plate at a steep angle to produce tones.  Pitch can be extremely difficult to control, hence the name (which also honors a dog I once had, Chase).  The tones vary a great deal in timbre.  The primary pitch of a tube can be lowered by as much as a 5th or 6th by holding it in both hands at different places along the length.  Driftwood is also used in the same way as the tubes but with vastly more pitch/timbre variety and corresponding difficulty to control.  This instrument truly plays the player.

Giant Skatchwheel:  A 33” diameter circular sheet of cardboard onto which are glued different elements: flat wood (coffee stirrer sticks), round wood (3/16” wood dowel), flat metal (various size zinc washers), round metal (3/16” bronze brazing rod) and textured surface (non-skid self-adhesive tape).  The elements are placed along concentric tracks (like the tracks of a record) in various patterns.  The Skatchwheel is played on a turntable (minus tone arm) by applying variously shaped combs and comb “heads” at different angles to the spinning surface.  Varying the speed of the turntable affects pitch while techniques manipulating the angles of the combs with wrists and fingers provide rich timbral and rhythmic variations.

Skatchplate:  A folded sheet of cardboard forming a thin triangle onto which are glued plastic combs as well as the five elements described above in various layouts.  Again, these elements are “skatched” using different specifically “shaped” plastic combs, and the playing techniques are similar to those used on the Skatchwheel.  The playing surface presents at a slight angle to the player, somewhat like a podium.  Contact mics (pickups) are placed on the underside of the playing surface for amplification.

Skatchart:  A Skatchart is a piece of cardboard painted white and attached to a wood frame with half-inch black borders.  The same types of element used in the Skatchplate and Skatchwheel are glued to the cardboard “canvas” forming a visual image.  As with all skatch instruments, specially shaped combs are drawn across the surface to elicit percussive rhythmic sounds, noise textures and linguistic/electronic sounds.