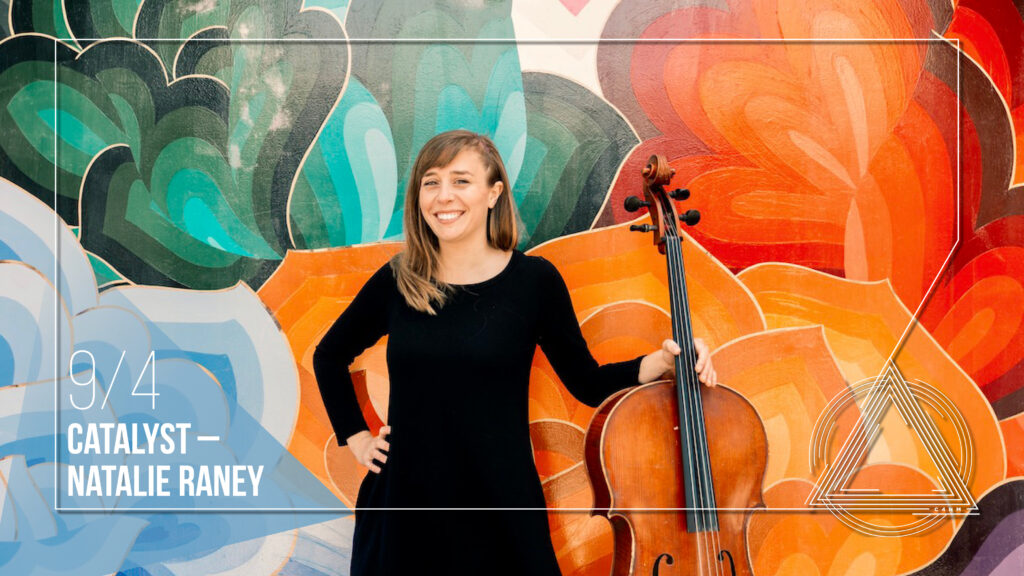 Cellist, Natalie Raney & Helia Music Collective present a vivid program of new and established works written by women for solo cello, each piece drawing inspiration from spring and nature. The program will feature newly-commissioned works by Elizabeth A. Baker, Julie Barwick, Emma Logan, and Belinda Reynolds. Included on the program is Kaija Saariaho’s striking work, Près, which draws inspiration from the sea, vividly illustrating the calm and the storm.

Bios:
Cellist, Natalie Raney is recognized for her bold and adventurous playing and has performed chamber music with world-renowned musicians such as Kim Kashkashian, Menahem Pressler, Geoff Nuttall, Bonnie Hampton, Roberto Diaz, Norman Fischer, Ian Swensen, Jodi Levitz, and the Arianna String Quartet and in venues such as Kennedy Center & Bing Hall. A proponent of new music, Natalie seeks to highlight works by women. She currently serves on faculty at the San Francisco Conservatory of Music Pre-College coaching chamber music and maintains her own private studio in SF. Natalie graduated from the San Francisco Conservatory receiving an Artist Certificate in Chamber Music studying with Jean-Michel Fonteneau. She received her Master of Music degree at Boston University, mentored by Marc Johnson, former cellist of the Vermeer Quartet and received a Bachelor of Music studying with Kurt Baldwin at the University of Missouri-St. Louis.

Co-founded by musician/composers, Emma Logan and Julie Barwick, Helia Music Collective supports the creative endeavors of women in music throughout the San Francisco Bay Area. Helia Music seeks to enrich the community and expand the engagement of women artists through educational outreach and collaborations, with performances and workshops taking place in unique and diverse spaces. Through charitable activities and events, Helia supports the education and development of women in the Bay Area and beyond.

Eschewing the collection of traditional titles that describe single elements of her body of work, Elizabeth A. Baker refers to herself as a “New Renaissance Artist” that embraces a constant stream of change and rebirth in practice, which expands into a variety of media, chiefly an exploration of how sonic and spatial worlds can be manipulated to personify a variety of philosophies and principles both tangible as well as intangible. Elizabeth has received international recognition from press, scholars, and the public for her conceptual compositions and commitment to inclusive programming. Fanfare Magazine proclaimed in Fall 2019 “Perhaps Baker will be the Pauline Oliveros of her generation, and perhaps she will be more than that.”

Raised in a Texan-Florida Air Force family, Belinda Reynolds now considers herself an ‘adopted native’ of California. Her music has been performed throughout the world and has been featured in such festivals and venues as Lincoln Center’s Great Performers Series, and the Spoleto Music Festival. Ms. Reynolds has also scored for films such as the independent PBS documentary, The New Metropolis. Ms. Reynolds is Vice-President of the composers’ collective, Common Sense and is the Co-Director of HeShe Music in San Francisco, a private studio that teaches composition to both beginners and professionals. Her music is published by Dover, HeShe Music, Kithara Editions, Les Productions d’OZ and PRB Productions. Her recorded music for guitar and other mediums can be found on the Albany, Innova, and Trance recording labels, among others.

Co-founder of Helia Music Collective, Julie Barwick is a composer and pianist originally from Southern California and now based in San Francisco. She is currently working on a commission from the Bay Area brass quintet, Brass Over Bridges, through the InterMusic SF Musical Grant Program. She was the 2017-18 Composer-in-Residence for Elevate Ensemble and was a winner of the 2016 Areon International Composition Competition. Other recent commissions were from Hot Air Music Festival, San Francisco Guitar Quartet, Siroko Duo, Jill Morgan Brenner, and Ignition Duo with the Guerrilla Composers Guild. She holds degrees from University of California, Berkeley, and the San Francisco Conservatory of Music.

San Francisco-based composer and curator Emma Logan (b. 1990) strives to write music that is emotionally compelling and to greater promote music by women. Her music has been performed across the United States, including San Francisco, Chicago, Boulder, and New York, and internationally in Paris, France. In 2017-19, Emma was a resident curator for San Francisco’s Center for New Music, and presented 20 unique programs during her tenure. As co-founder for Helia Music Collective, she has helped commission and present nearly a dozen new works by women composers for dynamic Bay Area ensembles. Recent collaborations include commissions and performances by Curium Trio, Robert Simonds, Composers Inc., Miolina Duo, Siroko Duo, Sopra Duo, Ensemble for These Times, the Guerrilla Composers Guild, and Areon Flutes. Upcoming projects include a commission with cellist Natalie Raney, the premiere of a newly revised work for Slow Wave, and presenting commissioning and curating projects with Helia Music Collective throughout the Bay Area.