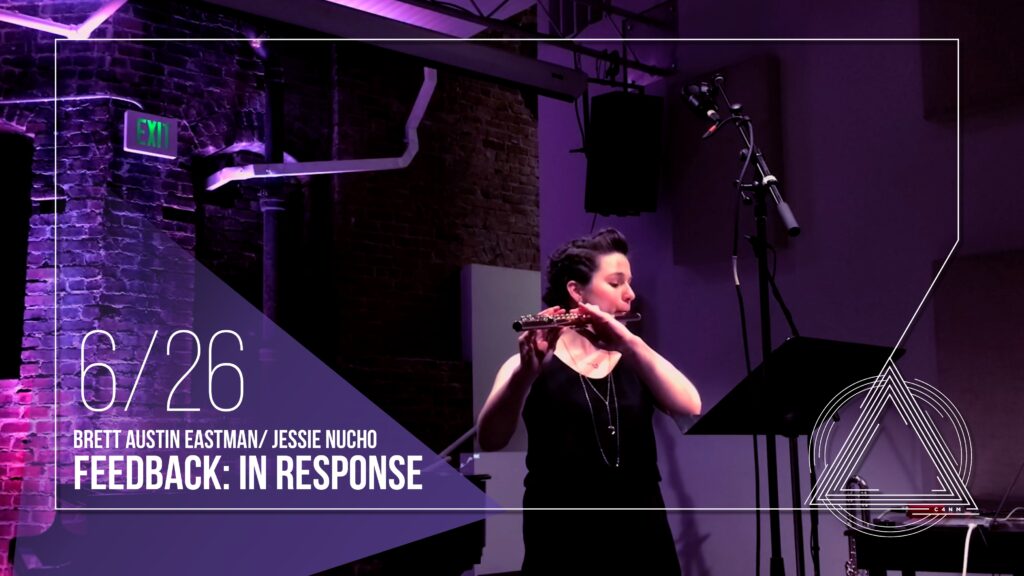 Join us for C4NM Encore Concerts – a chance to relive some of our favorite live performances at 55 Taylor, and a chance to reconnect with our community despite social distancing. Curators and artists will join in on the conversation in real-time to answer questions and discuss musical topics. To watch, just login a few minutes before the event time and look for a live video on our Facebook page or this event page (make sure to refresh).*

At this concert, composer Brett Austin Eastman and flutist Jessie Nucho presented the first in a three-concert series on the theme of Feedback. Often overlooked, feedback is one of the most important aspects of life. It exists not just in music but in everything we do and experience, from something as simple as call-and-response to processes as complex as machine-learning or even the growth of a living organism. Feedback is inherent to all interactions: human to human, human to machine, machine to machine. In Eve Beglarian’s From the Same Melancholy Fate, each new performance is derived from the compilation of every past performance and as a result is an ever-changing piece. Richard Reed Parry’s Duet For Heart and Breath takes feedback from the bodies of the performers themselves–pulse and breath create the parameters of the music. Elainie Lillios’s electroacoustic Sleep’s Undulating Tide explores deep intimacy and love, which are themselves forms of feedback. Also featured on the program is Anahita Abbasi’s no, I am not roaming aimlessly and the world premiere of Brett Austin Eastman’s In Response.

*Due to technical difficulties this event will not be available on our YouTube Channel.

Jessie Nucho is passionate about sharing both traditional and contemporary music as a chamber musician, soloist, and educator. She performs regularly with the new music ensembles After Everything and Ninth Planet New Music, and previously performed with Wild Rumpus. She is a co-founder of Siroko Duo, a flute duo dedicated to commissioning and presenting new works in creative spaces. Jessie holds an MM from the San Francisco Conservatory of Music, where she studied with Tim Day. Previous instructors include Alberto Almarza and Jeanne Baxtresser at Carnegie Mellon University.

Brett Austin Eastman is a composer, producer, teacher, and performing musician who has been part of many groups in the San Francisco bay area and has toured throughout the United States and Europe. Brett has recently composed works for Slow Wave, Keyed Kontraptions and Siroko Duo, as well as a quartet he put together for a concert he produced titled “Punk in Times of War.” He is co-founder and co-producer of the sci-fi punk band Andy Human and the Reptoids. He also composes/produces electronic music and has done sound design, most recently for the feature-length film The Murder of Hi Good by filmmaker Lee Lorenzo Lynch. Brett studied composition with Richard Festinger, Josh Levine, and Carlos Sánchez-Gutiérrez.