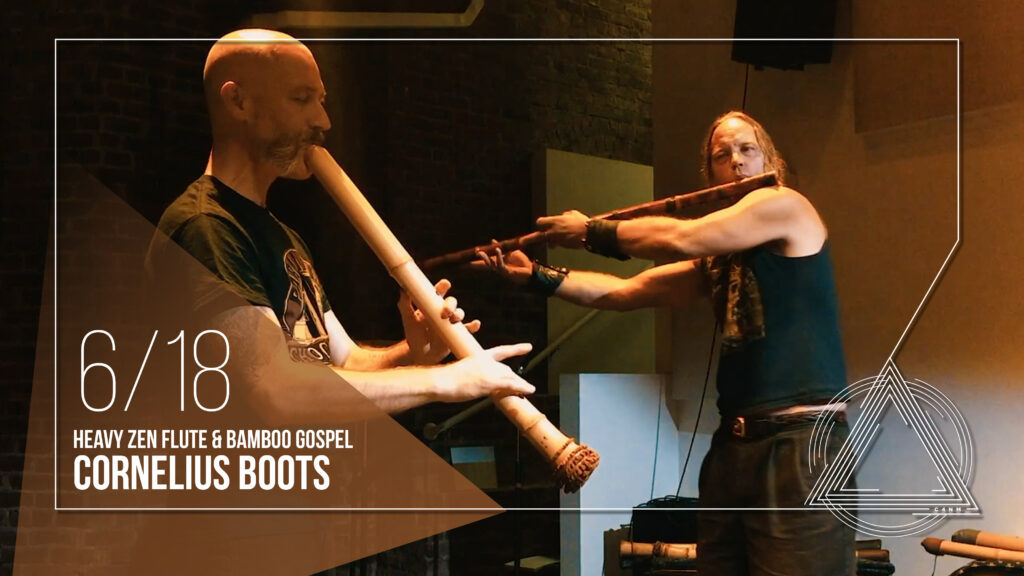 Join us for C4NM Encore Concerts – a chance to relive some of our favorite live performances at 55 Taylor, and a chance to reconnect with our community despite social distancing. Curators and artists will join in on the conversation in real-time to answer questions and discuss musical topics. To watch, just login a few minutes before the event time and look for a live video on our Facebook or YouTube channel.

At this concert, Cornelius Boots presented original compositions and improvisations emerging from a lifetime of woodwinding, and 18 years of studying and creating new repertoire for an ancient instrument of extremely basic design: shakuhachi. Shakuhachi—the root-end bamboo, vertical flute of Zen Buddhism—is like a talisman from feudal Japan, or an early hominid artifact. No mouthpiece, no keys or parts, 5 finger holes. In the right hands, it is a 100% breath-powered musical force of nature and has a soulful voice and musical versatility, allowing it to delve into blues, jazz, rock, classical and avant-garde realms just as fluidly as it plays traditional Zen nature hymns and kung fu movie theme music. Virtuosic, energetic, meditative and subtle, this concert features solo performances on a range of root-end bamboo flute sizes—from “standard” (shakuhachi) to bass (Taimu) to giantess—as well as some group explorations and special guests.

Cornelius Boots is a relentlessly innovative composer-performer, living in the woods north of San Francisco. Active internationally since 1990, Boots is “exuberant … a natural anxiety demolisher” (Paste Magazine) and “far left of center–beyond category” (Ari Herstand, author of “How to Make It in the New Music Business.”) He is a master of lost techniques and a licensed shihan (master) in the dynamic Zen lineage of Watazumido. His breath-defying compositions weave together threads from rock, blues, heavy metal and the traditional Zen repertoire, honkyoku. In 2018, he was a finalist in the World Shakuhachi Competition, a featured performer for Sony PlayStation’s E3 press conference (LA) and a featured performer/lecturer at both the World Bamboo Congress (Xalapa, Mexico) and the World Shakuhachi Festival (London).