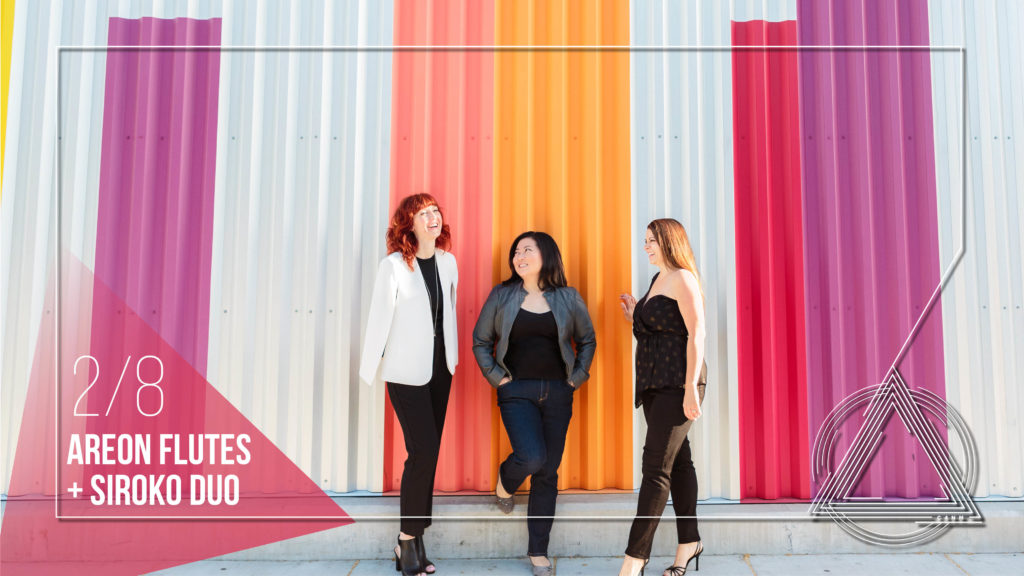 Areon Flutes and Siroko Duo join forces for this recital of new music for flutes.

Speed of Darkness by Izabel Austin is inspired by the second stanza of Muriel Rukeyser’s poem “Speed of Darkness”, which is about the interplay and transformation between listening, speaking, and silence. The piece is not meant to literally interpret or represent the poem, but instead draws on the sounds of the words and the ideas expressed in the poem.

Time and Place by Michael Kropf was commissioned by the Guerrilla Composers Guild and written for the Siroko Duo.

Hughes of Sylvia (for flute and alto flute) by Chelsea Loew represents a depressed Sylvia Plath (the alto flute) being admired and chased by a man (C flute). They eventually fall in love, as represented by the two flutes entangling themselves in one another musically, but he tires and leaves her. This is less a representation of Ted Hughes specifically, but of all the men in Sylvia’s life – from her father to her lovers to her husband.
Areon Flutes celebrates 15 years as an award-winning new music chamber ensemble and non profit organization in 2020. The trio will kick off their anniversary year by premiering their latest commissions from Julie Barwick, Jane Rigler, and Igor C. Silva.

Personal Space by Julie Barwick examines what “personal space” could mean in a world in which we can feel increasingly more disconnected from each other, despite the fact that we are seemingly more connected than ever. San Francisco-based Barwick is the winner of the 2016 Areon Flutes International Composition Competition.

Arboreous Incantations (for three piccolos) by Jane Rigler was inspired by Sir Jagadis Chandra Bose’s (1858-1937) scientific work on plants as well as other research related to how trees communicate, this composition pays homage to the various ways the piccolo (made of ebony and other woods and metals) vibrates. The composer has been awarded a New Music USA grant to record the work for her new album of original works, Whorl. Areon is honored to record Arboreous Incantations for the new Rigler album in 2020.

We Live in a Bubble (for flexible wind trio and electronics) was written for Areon by Igor C. Silva, winner of the 2018 Areon Flutes Commissioning Prize. The Portuguese composer (currently living in Amsterdam) is devoted to electronics and new media music, creating projects were performers, computers and many noisy and psychedelic things happen on stage, creating a multi-sensorial experience.

About Areon Flutes:
Aptly described by ICON Magazine as as “all-flute, all-the-time,” award-winning flute trio Areon Flutes has dazzled audiences with equal parts virtuosity, theatrics, and expert music curation. Since its founding in 2004, Areon is one of the only ensembles of its kind to make its mark equally between its innovative performances and its educational infrastructure. For their efforts, Areon Flutes has received praise from Fanfare Magazine for their “utterly pure intonation and tone” and by The Flutist Quarterly for their “great display of virtuosity”, with additional praise from Kathodik (Italy), ICON Magazine, San Francisco Classical Voice, Jazz Weekly, New Classic LA, and The Flute Examiner, among many others.

Areon Flutes is proud to have legitimized the flute ensemble as one that can find success on the international stage, and celebrates its 15th year of a decorated career. As the only flute ensemble in history to earn a Bronze Medal or higher at the international Fischoff Chamber Music Competition, their approach to both musicality and innovation in stage performance speaks for itself—their Carnegie Hall debut was met as a “memorable treat to all the senses” by New York Classical Review.

In an effort to demolish tired stereotypes of flute ensembles, Areon lives outside the box. Elaborate costuming and makeup are just the tip of the iceberg, as Areon has performed from the “wrong end” of the flute, acted out a Mayan ritual on stage, and more. To further their performance concepts, the ensemble takes on ambitious commissions of today’s most exciting living composers, having commissioned dozens of works since its inception. These commissioned works have unlocked new creative potential for ensembles: Areon has now performed with call bells, ocarinas, and drinking glasses; as well as playing alongside film, beatboxing, and more.

Of course, Areon has a storied history of contributing to the Bay Area through original educational programs. Notably, it operated a year-round Chamber Music Institute, a seasonal Summer Flute Institute, and International Chamber Music Competition. Alumni of Areon’s educational programs have won several national, regional, and California state competitions, including the National Flute Association High School Soloist Competition, and have been accepted to top-ranked universities around the world.

Areon’s growth can be traced through its deep discography dating over 12 years. Most recently, the ensemble released No Era (2018) on the innova Recordings label, in which it premieres post-minimalist work by Bay Area composers Ryan Brown, Danny Clay, and Sahba Aminikia. Its other three albums include Thrive! (2013), also on the innova label, as well as Gossip Cats are Dancing (2012) and Flat Out! (2006).

Based in the San Francisco Bay Area, Areon Flutes is made up of flutists Jill Heinke Moen, Kassey Plaha, and Meerenai Shim, its core roster since 2016. Areon operates as a 501(c)(3) non-profit organization, and perform on Miyazawa flutes as Miyazawa Artists.