In compliance with San Francisco’s order to shelter in place, the Center for New Music is closed beginning March 16. All events through the end of April are canceled. From our blog: Resources for Artists During the COVID-19 Outbreak
During these extraordinary times, donations are critically important to the continued survival of arts organizations. 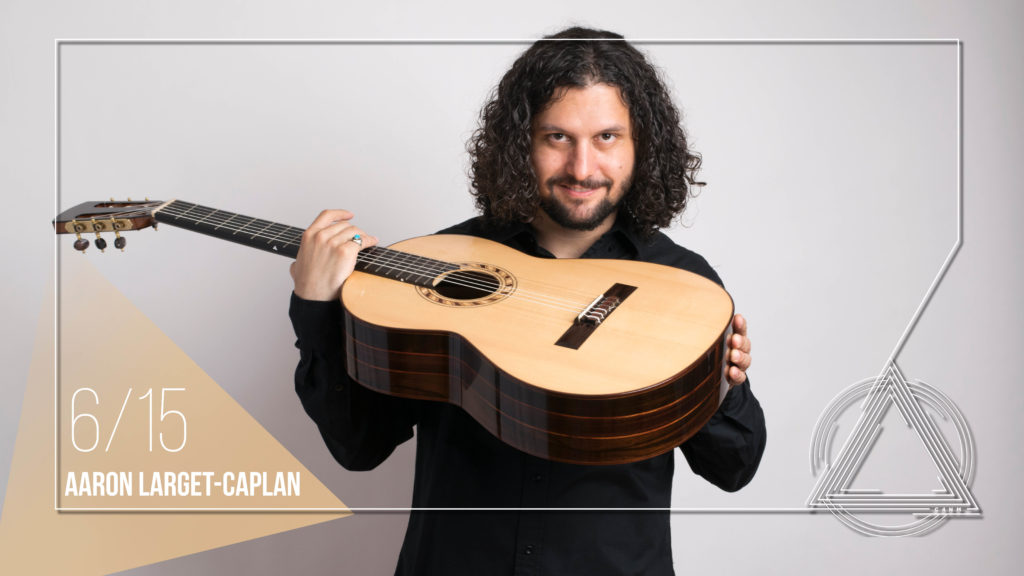 For this third performance at C4NM, classical guitarist Aaron Larget-Caplan continues his journey to expand the guitar repertoire with his latest program ‘Directions’. Featuring music for guitar and electronics by Tom Flaherty and Lou Bunk, new solo & duo transcriptions of John Cage, and solo compositions by Vineet Shende and Ken Ueno. Aaron will be joined by local guitarist Michael Goldberg for the Bay Area premiere of Cage’s ‘Bacchanale’ arranged by Aaron for two prepared guitars.

Aaron discovered the music of Southern California-based composer Thomas Flaherty through the composer’s recordings and works for cello and guitar. In 2017 Aaron reached out to the composer for a work for guitar and electronics and in 2019 he received ‘Steps & Leaps’. The composer writes:

“Composed around the 50th anniversary of the first human landing on the moon, its title inspired by Neil Armstrong’s first words from the surface of the moon, “One small step for a man, a giant leap for mankind.” The music brings to my mind the beating hearts, ticking clocks, interlocking actors, rising tension, and release into weightlessness that I associate with that first lunar landing.The piece uses electronic delay, transposition, and reverb, and a little percussive tapping on the body of the guitar, but it is about the notes as much as it is about effects: “steps” are adjacent notes in a scale, “leaps” are any larger intervals. “Steps and Leaps” is dedicated to Aaron Larget-Caplan, whose artistry inspired the piece.”

Lou Bunk is a Massachusetts-based composer who writes or improvises for everything from ensembles to rubber bands and amplified Styrofoam. ‘Being and Becoming’ is a quasi-medative piece of subtle shifts interspersed with tastes of chaos for guitar and Sine Wave. Premiered in 2011, Aaron recorded it in 2019 and this performance is the California premiere.

In 2013 Aaron started arranging the music John Cage for guitar with ‘Six Melodies’ for violin and guitar. Published by Edition Peters in 2015, the Polish guitar publication ‘Six Strings of the World’ wrote: “The release of such works [by John Cage] is very important for the development of the modern guitar repertoire. The transcription of Larget-Caplan has ennobled our instrument.” A solo collection of seven arrangements was published in 2017, for which the classical guitar magazine ‘Soundboard’ wrote: “I would strongly advocate these [Cage ] compositions to be performed by young guitarists before they start working on any other contemporary composers.” Originally a work for prepared piano, Aaron transcribed Bacchanale for prepared guitar duo using paper, alligator clips, washers. It is scheduled to be published in 2020 by Edition Peters.

Ken Ueno contributed to Aaron’s New Lullaby Project with ‘Ed è Subito Sera’ in 2013, and Aaron subsequently recorded on his 2015 album ‘The Legend of Hagoromo’. A magical lullaby inspired by a poem by Salvatore Quasimodo.

Vineet Shende’s ‘Carnatic Prelude N. 1, After J.S. Bach’ is an ongoing collaboration between Vineet and Aaron. Vineet reimagines Bach’s Well-Tempered Clavier preludes as if Bach lived in Southern India. Aaron transcribes the originals for guitar and pairs them together. A set of 12 is set to be completed in 2020.

Aaron is very excited to be returning to C4NM, “one measure of a city is the openness to the new and C4NM is a place that explores just that. It is not glitzy, but it is full of life and Art, and for that I am grateful for the support from the community and its continued presence.”

* Arranged for guitar by Aaron Larget-Caplan

“Aaron Larget-Caplan is a riveting artist”(Washington Post) with “astounding technical proficiency and artistic delicacy” (Boston Musical Intelligencer). A trailblazing artist, he records for Stone Records and regularly tours internationally. A deft programmer, Aaron has premiered over 80 compositions, and his groundbreaking arrangements and recording of the music of John Cage are the first sanctioned by the publisher Edition Peters. Aaron received the Médaille D’Etain from the Société Académique Arts-Sciences-Lettres de Paris, France. In January 2020 he will be Musician in Residence at the Banff Centre for Arts and Creativity. His recordings are available on Albany, Navona and Stone Records, and he is on faculty at University of Massachusetts Boston and formerly Boston Conservatory. www.ALCGuitar.com

Michael Goldberg has extensive experience teaching both classical and jazz guitar. He currently teaches at U.C. Berkeley, U.C. Davis, the Jazzschool Institute and maintains a private teaching practice in Berkeley. He has toured and maintains a private teaching practice in Berkeley. Mr. Goldberg has recorded on the Arabesque and Kameleon labels. He has toured throughout the United States as part of the Alma Duo, an ensemble of violin/viola and guitar, and is also a member of the Left Coast Chamber Ensemble, a group devoted to contemporary music performance. Mr. Goldberg has been featured with the Philharmonia Orchestra of London , Santa Rosa Symphony, Philharmonia Baroque, Berkeley Symphony. He received his M.M. from the San Francisco Conservatory of Music where his principal teacher was David Tanenbaum.

Lou Bunk (b. 1972) is an American musician inspired by many forms of experimental artistic expression. Educated in classical composition, and deeply influenced by the noise and improv scene in and around Boston and New York, Lou’s music occupies a space between and among concert halls and fringe performance spaces. In his home town Somerville Massachusetts, Lou produces the concert series Opensound, and has chaired the Somerville Arts Council. He co-directs Collide-O-Scope Music, a New York City based new music ensemble, and is Associate Professor of Music at Franklin Pierce University in New Hampshire where he teaches electronic music and composition. Lou received A PhD in Music Composition and Theory from Brandeis University.

Tom Flaherty is a composer and cellist who makes music for humans and electronics. He earned degrees at Brandeis University, S.U.N.Y. Stony Brook, and the University of Southern California, where he studied with Martin Boykan, Bülent Arel, and Frederick Lesemann and cello with Timothy Eddy, Bernard Greenhouse, and Eleonore Schoenfeld. He currently teaches composition, theory, electronic music, and chamber music at Pomona College. Published by G. Schirmer, Inc. and American Composers Editions, his compositions have been recorded on the Albany, Bridge, Capstone, Klavier, Reference, Microfest, and SEAMUS labels, and have received numerous awards, including a Grammy nomination in 2015.